Go time.  Seems like I have been treading water for a while and now it is time to get through Leadville and move on.  I had a difficult race there last year, and this time around I want to at least make it through without falling apart.  One part of me sees that I am ahead (+200) on YTD miles vs. the year I ran well in 2009.  So that gives me some hope.  When I take a macro view, though – reality starts to set in.  I trained hard in the summer of 2009 and put in 11 runs over 20 miles (including a few over 30) in the last 8 weeks before the race.  This year that tally stands at 3.  One of those being a race, and the other two barely breaking the 20 mile mark.  That’s not so good, for a faster race anyway.

All I can do now is show up and do the best I can with what I’ve got.

Monday
Run – 7 miles
Nice steady run. Felt like I spent half of it doubled over laughing as we joked about various topics. Especially the ‘motivational’ self-talk we employ during runs and races when things aren’t going well. Not fit to print.

Tuesday
Run – 8 miles
Got in a nice run while waiting for the kids to finish XC practice. Stepped on a nasty rock 90 seconds into the run. That hurt.

Thursday
Run – 8.7 miles
Felt like pushing a bit today. Hilly route. First half was a smooth cruise, then fought the fade over the second half. Much harder effort to sustain the same pace.

Saw a girl get creamed by a car at an intersection while waiting to cross. She was riding a bike with her ipod on (attached to the handlebar) and rolled out into traffic when she didn’t have the right of way. Completely her fault – which she recognized. Banged up, but thankfully not too bad. Saw it all, held up traffic as I ran across the intersection to help get her bike untangled and out of the road.

Friday
Run – 5.5 miles
Easy run that actually felt easy for a change. Nice. Foot very sore from stepping on a stone Tuesday, but everything else is starting to feel pretty good.

Saturday
Run – 14 miles
Encouraging.  I last ran this tough route a month ago and was 30 sec/mile faster today at a much lower effort.  My calves were better today than they’ve been for a while, and I enjoyed having a decent run.  Probably the best I’ve had since the backpacking trip. 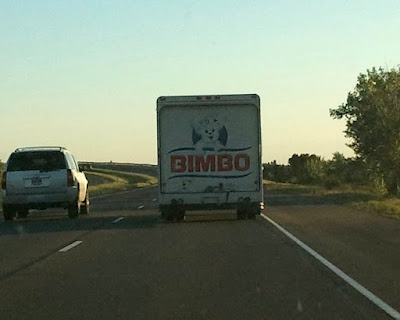 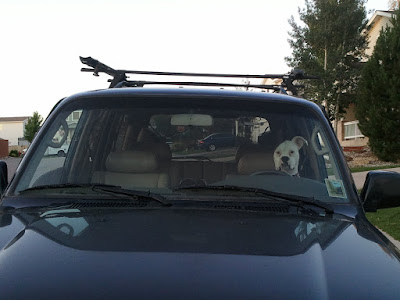 Rio sez, let's get the show on the road

The plan was to drive two vehicles to the North Cottonwood Trailhead west of Buena Vista.  Then while the boys waited, we would shuttle another car over to the Denny Creek Trailhead where we would be coming out on Thursday afternoon.  It was only an 18 mile trip to arrange the shuttle, but it took a full hour because of the road conditions.  Needless to say, everyone was anxious to get on the trail by the time we made it back. 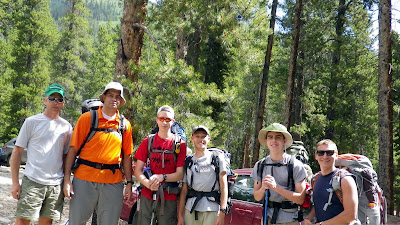 Our hike would be somewhere between 5 and 6 miles, with some good climbing in the second half.  We wanted to get as high as we could without going too far beyond treeline because of the threat of storms.  Our original plan was to camp at Bear Lake, but it was very exposed so we opted to stay just a bit lower.  This high camp would set us up nicely for the hike to the summit of Mt. Harvard the next morning. 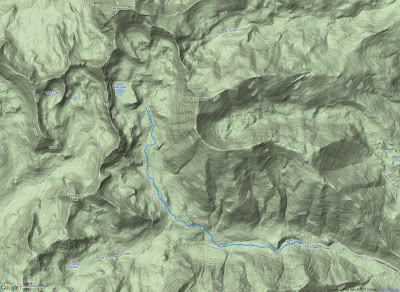 We shouldered the packs, which is always a wake-up call at the start of a trip, and headed down the trail.  It was easy going for the first mile and a half which made for a nice warmup. 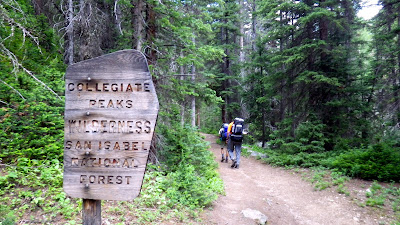 After that we crossed a river and got started on the climb.  Which is always another slap in the face on day one.  Oooof.  My legs were very tired, but I was happy they didn’t feel sore at all after running a 50 mile race two days prior. 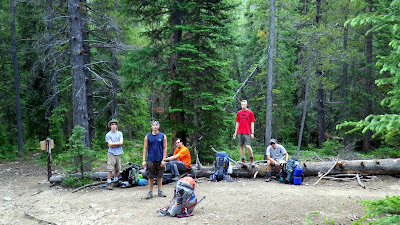 Rest stop #1, getting ready for the big climb

After that, it was grind, rest, repeat.  Eventually we made it to treeline and decided to stop there due to the variable skies. 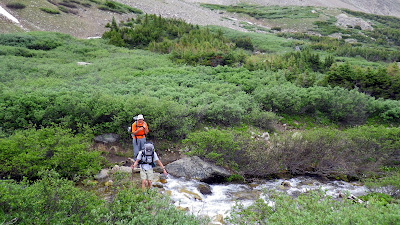 We made it to our campsite a little earlier than planned because we stopped short, but this gave us plenty of time to hang out and explore the area.

Settling in to camp one 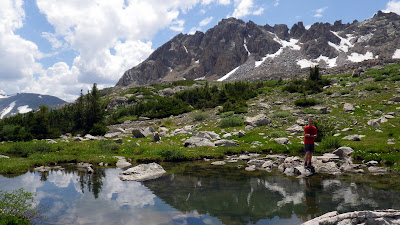 We had a clear view of the morning’s objective behind our camp.  It looked close, but the summit was still 2.5 miles and 2,300 vertical feet away. 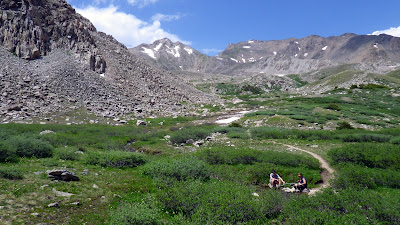 Filtering water below Mt. Harvard (to the rear right of center with the small patch of snow just below the summit) 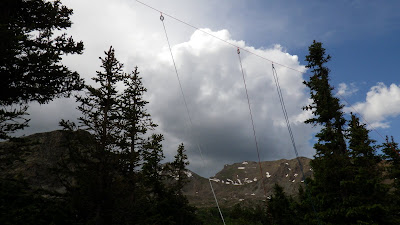 String 'em up - setting up the bear bags

The clouds began to rapidly roll in later in the day and thunder rumbled up and down the canyons.  The next shot is one of my favorite ones of the whole trip.  It’s not that remarkable at first glance, until you see what the clouds are doing.  A huge wall of dark clouds was headed right for us, but Mt. Yale (another 14er across from us) saved the day.  Acting every bit of the upturned wedge that it is, the peak split the clouds in two as they rapidly moved our direction.  Keeping us in the tranquil wake for quite a while.  It was awesome! 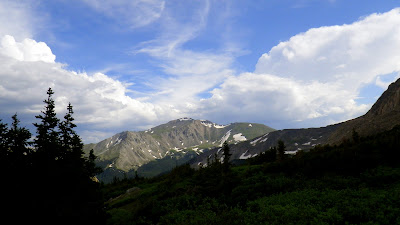 Things shifted after some time and we eventually did get a little rain.  Nothing very bad, though.  The worst of it missed us and dumped 3 inches on Breckenridge later that night. 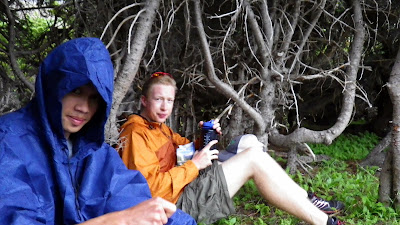 Tyler and Malcolm finish dinner in the rain