Well, there you have it.  One of my lowest training years in quite a while.  It’s still a significant chunk of time and miles by many standards, but I felt like I was just barely scraping by most of the time. 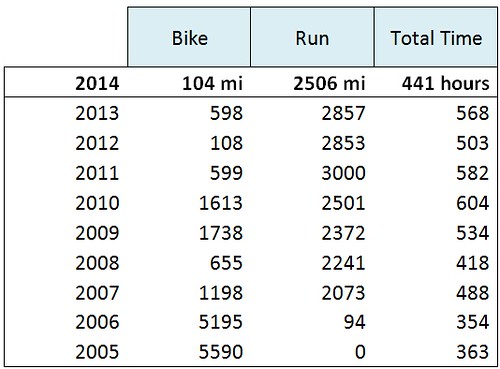 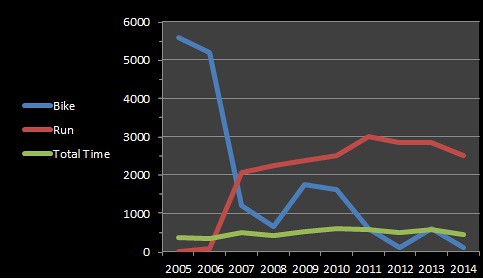 I spent a significant time behind the camera this year, photographing 19 races.  While my trigger finger got a great workout, and I did log over 75 miles packing the camera gear during the events, my fitness felt on the low side while my weight remained on the high side for most of the year.

I would be a lot more thrilled with 2,500 running miles IF there were about 1,500 bike miles to go along with them.  The bike miles are seriously lacking lately.

Ok, enough of that.  I did what I could with what I had, and I’m all set for a great 2015!  Really looking forward to embracing the training again and focusing on getting back to the kind of level I know I can reach.  I already have some 2015 race shoots booked, and my own racing calendar is starting to take shape.

Looks like I will be skipping the Leadville 100 this year after being part of it every year for 8 in a row (volunteer, DNF, then 6 consecutive finishes).  I’m torn about passing on it this year, but it falls a week later than normal, and the scheduling is problematic for me for a variety of reasons.  No absolute deal breakers, but enough so that it would seem like making it through the lottery would only result in my own little lottery of whether or not I was going to be able to make it to the race or not.  I don’t feel like training with that hanging over my head this year, I want to select some events that are free from any scheduling conflicts and then really do my best to train hard and prepare well for them. 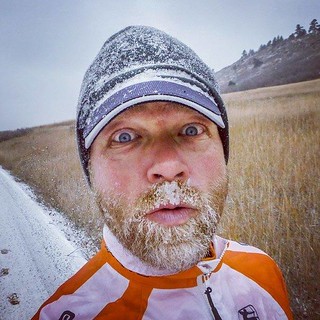 Posted on December 31, 2014, in Uncategorized. Bookmark the permalink. 7 Comments.