It took me a few weeks, but I finally came up with those words to describe the essence of this 24 hour race. You run a small loop (.82 miles in this case) over and over again for as many times as you can in a 24 hour period. Most laps wins. You are free to set your own schedule. Take a break, go see a movie, sleep, eat, or whatever. But the clock is always ticking. The amount of suffering you endure is entirely up to you. Never more than a half mile from the start/finish area, ending the suffering is always a readily available option.

At least there wouldn’t be any route finding issues! 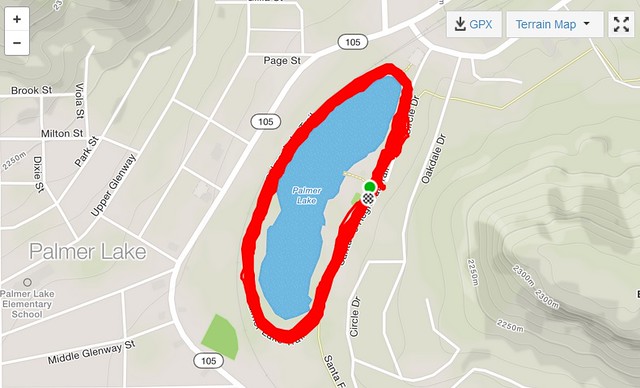 Reversing those opening words also makes for a pretty good description of how my race went.

One reason why an event like this held some interest for me was the experiment of finding out how far I could go. I knew I could run one lap, so why not two? I was pretty sure I could run 50 laps, so why not 51? If I could run 100 laps, why not 101? Where was the line, that magic lap number that represented the most you could do? The feeling was very different from the typical race mentality of get-from-point-A-to-point-B as fast as possible. Where was my limit? Could I keep going for the whole time and avoid the pull of a nice meal and a warm car to sit in?

A steady wind was the order of the day as we took off at 8:00 in the morning for the long journey ahead. It is so strange to think that (if you’re lucky) you will still be moving at this same time the next day. Better not dwell on that too long…

The venue was nice. A small lake with a dirt path, mostly flat but with a slight climb through the start/finish of each lap. Lots of space for setting up tents, tables, or other aid areas. 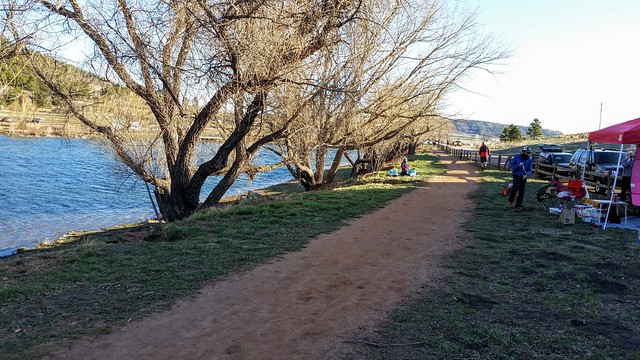 I used a wagon filled with enough supplies to get me through about three weeks of running. I figured if things got really bad, I could just tow it along behind me… 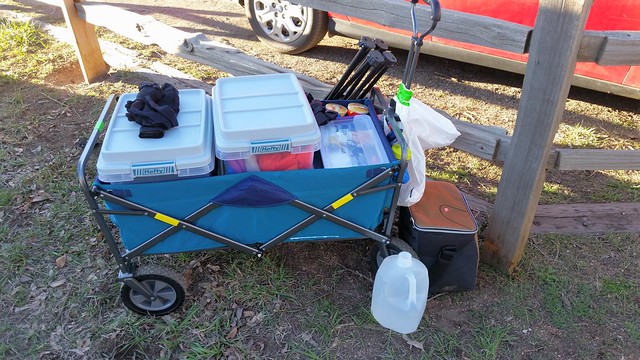 After a quick set of instructions and good luck by Chad the RD, 112 of us set off for a very long jog.

Some runners took off and were blazing through laps right away. Others went straight into a run/walk rotation to hopefully preserve their legs and extend the distance they could cover. I set out at the same pace I run a hilly loop around my neighborhood nearly every morning. An easy stride just over 9:00/mile that usually results in a heart rate of around 130 beats per minute. Only now it felt like I was working to maintain that speed and my heart rate was in the upper 140s and sometimes creeping above 150. Hmmm, I thought. Maybe I just need a few miles to warm up and loosen up a little.

My legs never loosened up, I never ‘hit my stride’. To make things worse, my shoes were tied too tightly and I had to stop and completely take them off and start over again. Twice! They were new-ish road shoes (Altra Instinct 3.5) that were slightly too large for me and I was cranking down the laces to make up for it. Then I changed shoes at mile 50 to my trusty Lone Peak 2.5s. I was loosing heaps of time all over the place, and I didn’t have the legs to cover the losses. C’mon Boyack, don’t be such a rookie!!

I finally made it to 50 miles in 8:52. I would normally be happy with that time on the front-end of a run like this if I could reach it conservatively. The truth is that I had worked too hard to get there and would pay for it later.

Ok, enough of that. Let’s talk strategy and how am I going to hold this mess together.

We were given the liberty of changing loop direction at any time. I decided to go with every 25 laps. The clockwise direction I started with was nice because there was a very strong breeze blowing out of the south. You run downhill into the wind, and then it would push you along the backside of the course which was all flat. Climbing up to the start/finish was a little bit sheltered by trees from the wind, so this direction felt optimal. For efficiency sake, I probably should have stuck with it. When I switched to CCW it seemed like I was really fighting the whole way up the backstretch to get through the wind, then I wasn’t getting that much benefit from it on the other parts of the course. For mental health, I probably should have switched sooner and more often. I think I would change direction more frequently like every 15 or 20 laps if I ever do the race again.

Keeping track of lap counts was (for better or worse) entirely up to the individual runners. Poster boards were mounted to a table and you would make a hash mark next to your name for every lap. Keep in mind this race had a $28 entry fee. No electronic timing in the budget. I adopted the tactic of religiously hitting the lap button on my watch every time I came through the start/finish, then every fifth lap I would stop and make a batch of 5 hash marks. This worked out pretty well, but when your brain is foggy in the middle of the night it can still be difficult to keep track of. I double-checked my laps on Strava afterwards to make sure I didn’t miss any. 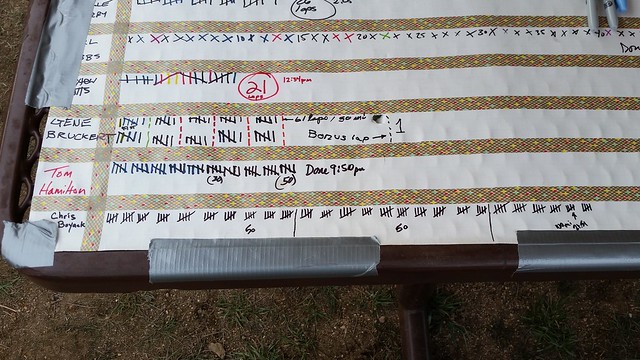 Back to the race.

I got a bit of a second wind after changing shoes at the 50 mile mark. That faded quickly as my stomach slowly knotted up over the next several miles. It seemed to be shut down, even though I was still putting stuff in it. Finally at mile 82 I took a salt capsule and tried to wash it down with some coke. Bad combination. The pill got wedged sideways in my throat and the coke was super fizzy. It triggered a huge gag reflex and I found myself doubled over spraying the grass with everything I had taken in over the past several hours. The episode was so violent I ran the rest of the race with an awful side-stitch feeling that would never go away. It wasn’t a stitch, but I had torn or moved something between my ribs while throwing up and it resulted in this sharp and persistent pain.

I did win this awesome handmade wooden bowl for having the “best vomit”. Made by @ironbeard1: 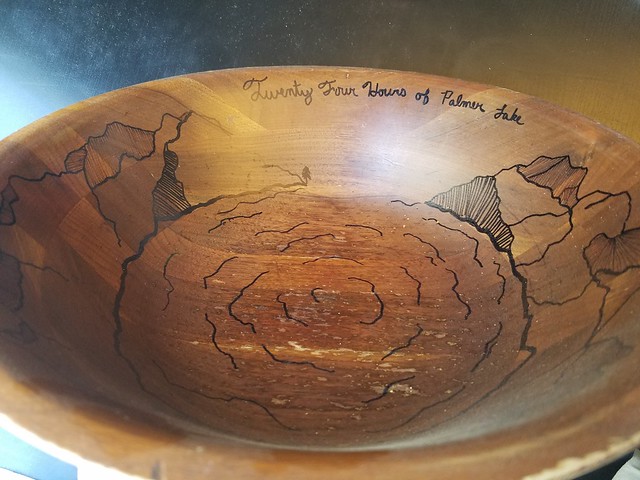 Are we having fun, yet?

Things got mighty quiet out on the course during the wee hours of the morning as most runners took a break in their tents for a while. Chad and his crew were great in always checking on me and offering assistance anytime I came through the aid station.

As dawn approached, more and more runners started filtering back onto the course and that was a huge help to keep the wheels turning. I was jealous of how well most of them were moving and tried my best to hold a good effort through the 100 mile mark. I think I hit that distance at around 21:45 (21:34 per Garmin) into the race and was definitely fraying at the seams. I had hoped to ‘cruise’ through 100 in relative comfort somewhere around 20 hours and then tack on as many extra miles as I could in the time that remained. The reality was that the 100 had really taken a lot out of me and I was reduced to a fast walk after that. I kept at it, lap after lap, and finally pulled the plug when I hit a total of 130 laps (106.6 miles). I could have squeezed one more in, but 130 sounded like a nice number to finish on. I found the answer I was looking for.

Thankfully, it was enough for the overall win and course record! That was totally unexpected, and it was a super cool experience to stand on the top step and get a nice award. 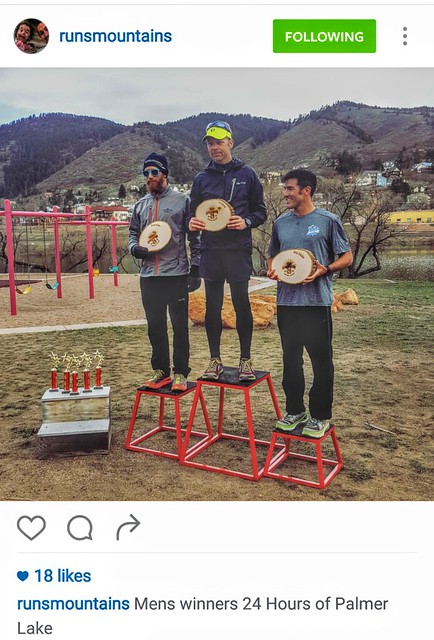 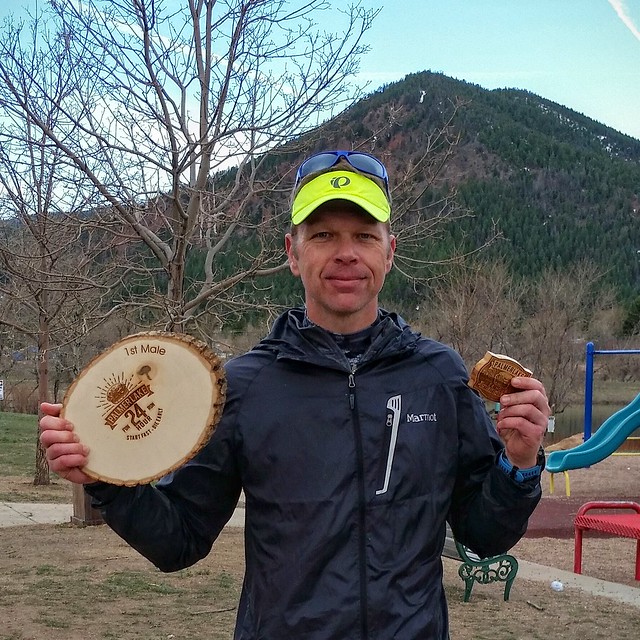 Big thanks to Israel Archuletta for starting this event three years ago, and a HUGE job well done to Chad and the Palmer Divide Run Co. crew for taking over the show and keeping the tradition alive.

This is an appealing event to all abilities as it presents a good opportunity to set a speed or distance PR in a fun environment with lots of friendly encouragement along the way.  I think it will just get bigger and better over the coming years.  It is low-key and highlighted by a low entry fee (28 bucks – and you get that back if you break 100 miles!),  and fun awards like these wooden belt buckles. 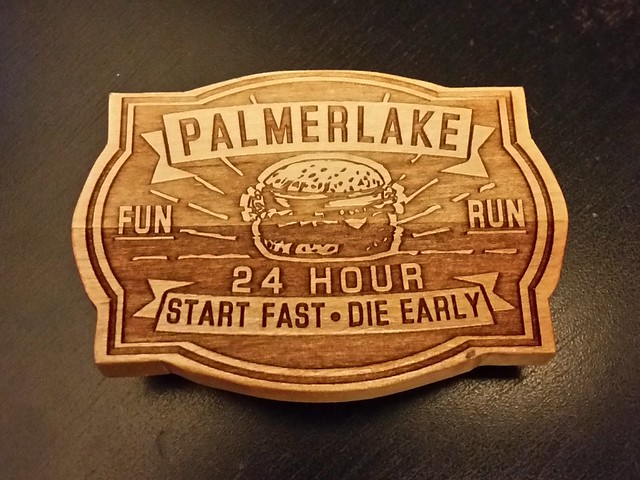 Results can be found here: