Our plans for this weekend changed nearly a thousand times it seemed, finally settling on doing a loop around Abyss Lake and linking up the Bierstadt and Evans summits with a trip over the sawtooth.  A shortened version of the route I took a few years ago:

The weather was in our favor, with a stout high pressure firmly blocking out any moisture in the area.  This meant we wouldn’t have to deal with the threat of thunderstorms while up on the exposed ridges.  Realizing that we had a somewhat rare situation on our hands with a free Saturday lining up with such a great weather pattern nudged us to change plans yet again.  We’d drive down and camp near the trailhead for the DeCaLiBron and do the loop the next morning which would take us over the 14er summits of Democrat, Cameron, Lincoln, and Bross.  That would make four out of the five 14ers that are located in the Mosquito Range of central Colorado.

Then the plan changed again.

As we were carrying the last load out to the car, Malcolm casually mentioned that we might as well just do Sherman tonight (the remaining Mosquito Range 14er).  Since it was in the same neighborhood and all.  Okay, then.  Now that sounds like a plan!

We left home around 7:00pm Friday night, but due to stops to grab some sunset shots, dinner, and supplies for the next day, we didn’t truly hit the road until 9:00. 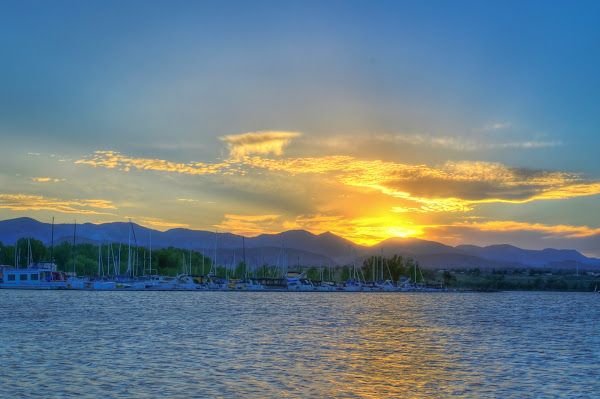 We found our way to the Mt. Sherman trailhead in the dark, and started hiking at 11:20.  It was a pleasant night with a quarter moon that set early, leaving an inky black sky with thousands of twinkling stars.

The first half of the hike was a straightforward march up a dirt road that traveled past some abandoned mines. One of them produced over 300 TONS of silver back in the 1970’s.

We scrambled up and over a small cornice to gain the prominent saddle at a little over 13,000′.  Now it was well past midnight and time to work a little harder to get up the steep ridge.  At 13,600′ the ridge narrows quite a bit and you come to a little notch (sort of a mini-saddle).  This is where things got interesting.  The wind, which had been steady all night, was absolutely raging through here.  We regrouped at the final spot of shelter and then I ventured out, only to turn back after about 10 steps.  It was wild!  I took off my pack, broke down my trekking poles, secured them, and then cinched everything up tightly.  I was going to need my hands free and would be in a crouched position, making the poles more of a hinderance than help.

We carefully navigated through the notch and then began climbing the ridge again.  Once we got a little ways above the notch, everything calmed down.  Soon we were on the summit with only a minor breeze to contend with.  We took some pictures and then shut off our lamps to gawk at the amazing sky for a while.  Quite a sight. 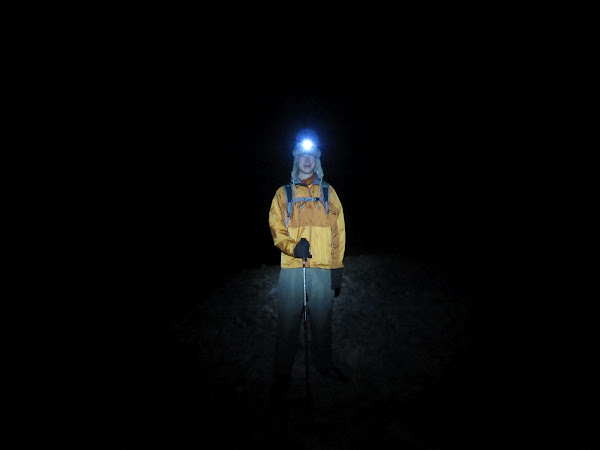 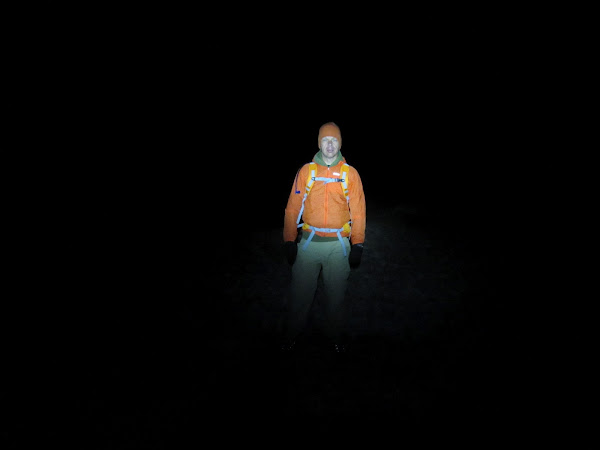 The descent started out nice and mellow, but we soon encountered the wind far higher up on the ridge than where we had left it behind on the ascent.  It was crazy, and felt like it had at least doubled intensity.  I’m thinking 60+ mph would be a reasonable estimate.  We were doing forward and reverse crab-like walks at some points to keep low and still make progress.  I became aware that I was actually piloting my foot with each step, adjusting pitch, yaw, and roll to guide it to the landing spot.  You just couldn’t force your foot into position.

After what seemed like a very long time we finally dropped below the ridge and were out of the deafening roar.

The rest of the hike was mellow and we just stared into the spots our headlamps made on the ground and trudged onward.  Made it back to the car at 3:00 in the morning, dumped our sleeping bags on the ground, and set the alarm for 6:45.

The alarm wasn’t needed…  I barely dozed at all, and was feeling like I was about 105 years old when I got up. 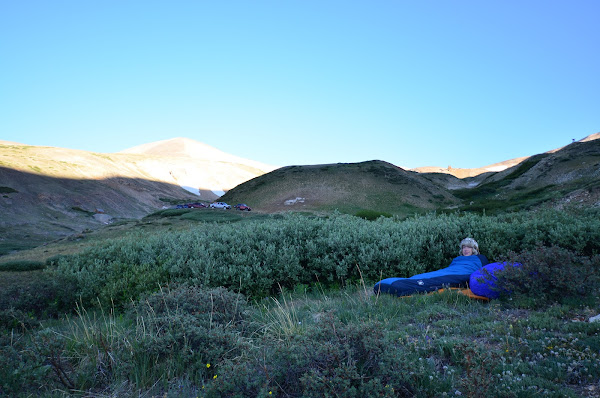 It took longer than I expected to get to the trailhead of our next objective, the DeCaLiBron.  The late-ish start wasn’t too bad, given that we had excellent weather conditions.  Four summits were on the menu, and we made short work of Mt. Democrat and spent a while on the summit enjoying the great view. 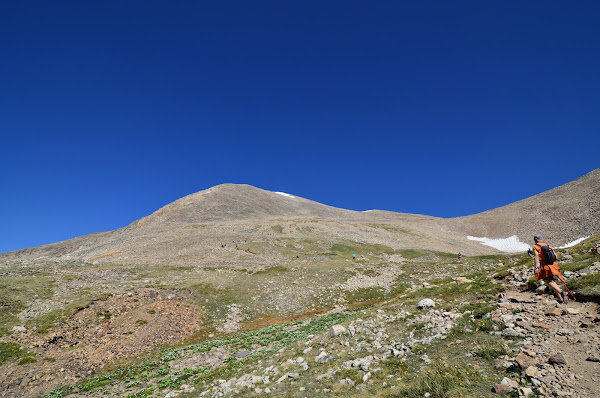 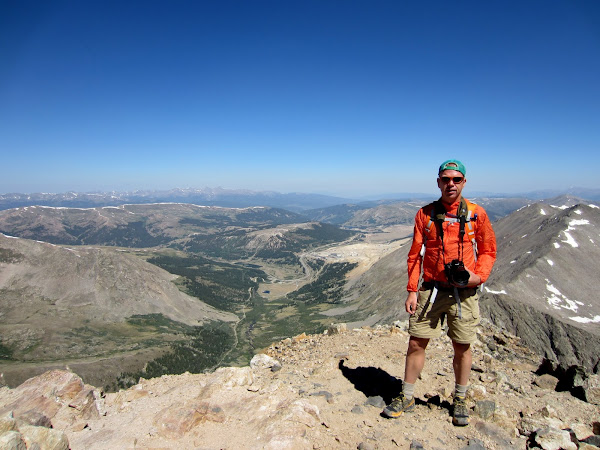 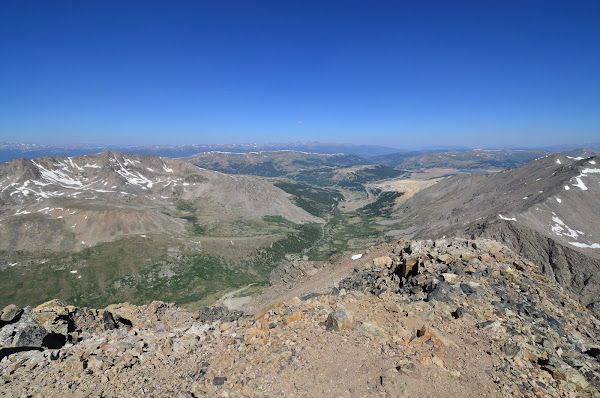 Cameron was up next, and Malcolm worked me over pretty good on this one as his gummi bears started to kick in and give a boost of energy.  I was working hard to keep up!  Must have been the hiking pole-leg. 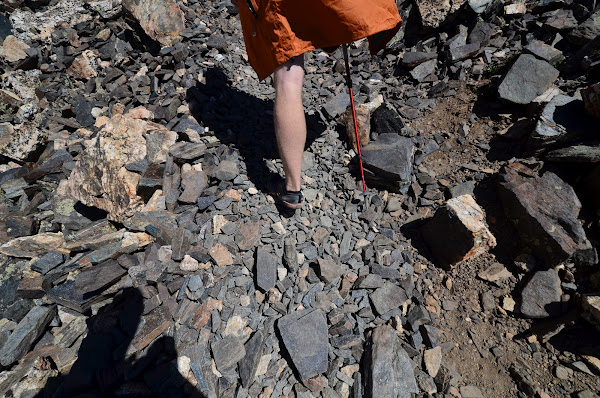 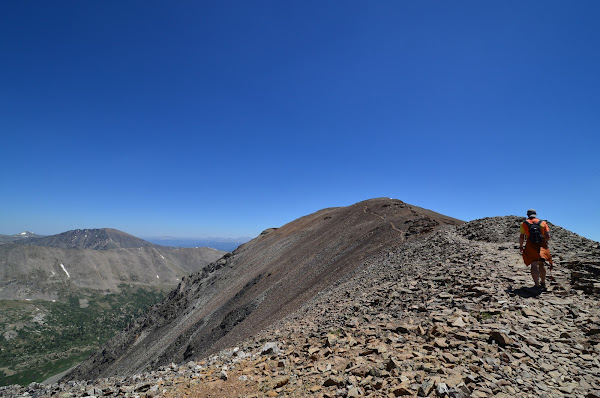 You can see the smoke from the Treasure Fire near Leadville that started about 30 minutes before this picture was taken.  We didn’t notice it at the time. 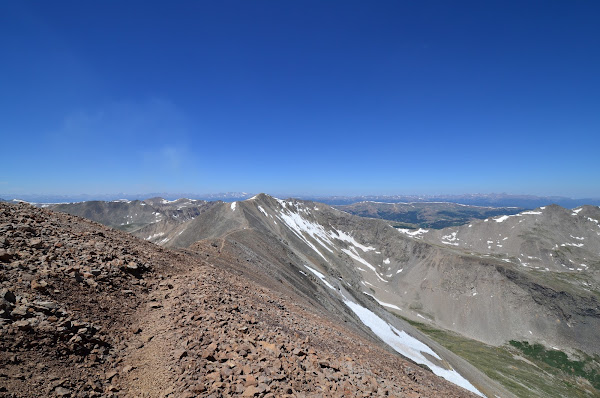 The Cameron summit was somewhat plain, so we didn’t take much of a break there.  Lincoln was much more interesting. 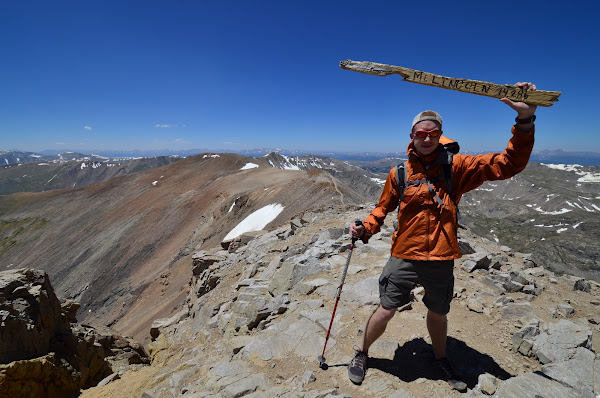 As we were coming off the Lincoln summit, a girl stopped me and pointed out a mountain goat that was working its way toward us.  It was very casual and not in any hurry.  In a matter of about a minute, there were at least 6 of us lined up next to each other snapping photos like crazy.  The goat kept moving closer, and closer.  It seemed to be more curious than afraid.  When it got about 10 feet away, it looked a little more determined and kept moving towards us.  I was in sort of a football lineman position with one hand on the ground and holding the camera low with the other while I maintained eye contact and fired off shots without the help of looking through the viewfinder.  Closer and closer it came until I finally stood up straight when it was 4-5 feet away.  This stopped its approach and it backed up a bit.  The funny thing was, I had forgotten about all the other people.  It turns out they were all in a single file line behind me!  It looked like something out of a cartoon with each person’s head poking out at a different angle. 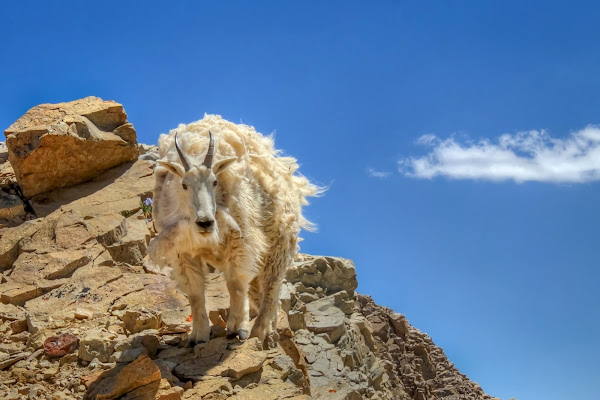 The day started to drag on a little after that, and we made quick work of Bross before the final descent.  That descent went on forever!  On and on and on we marched down the mountain. 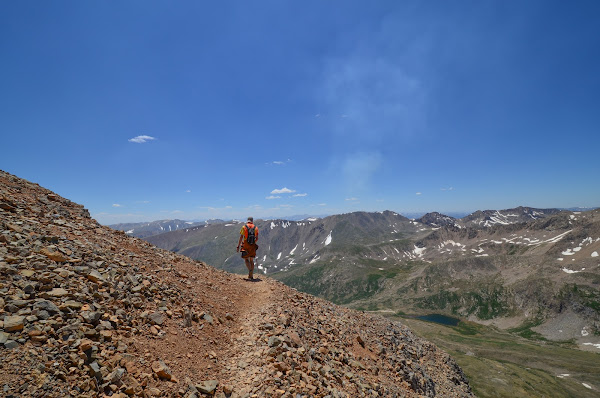 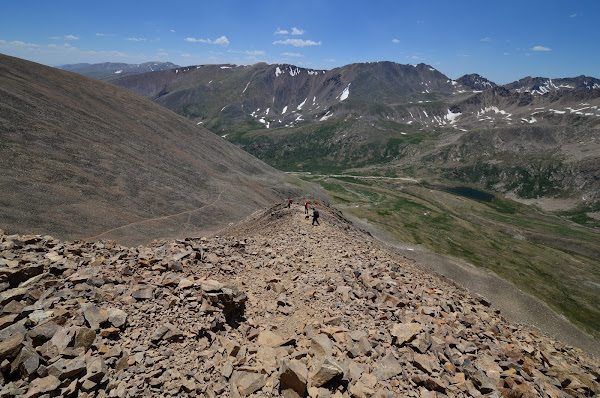 About halfway down, I finally noticed the smoke as it was creating a pyrocumulus.  This shot ended up as my Friday Foto for the week. 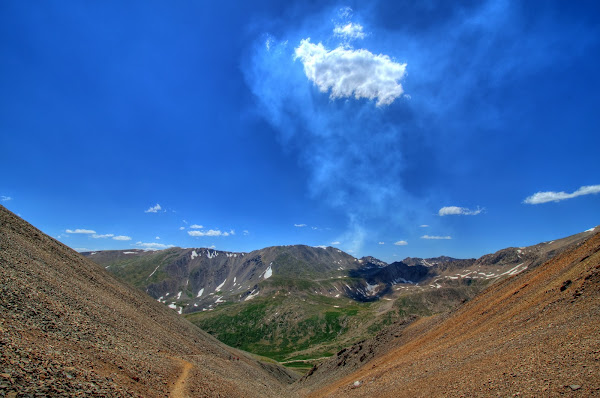 A final push and we were done. 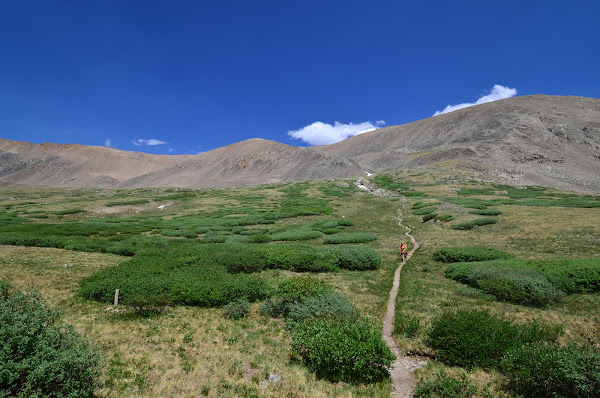 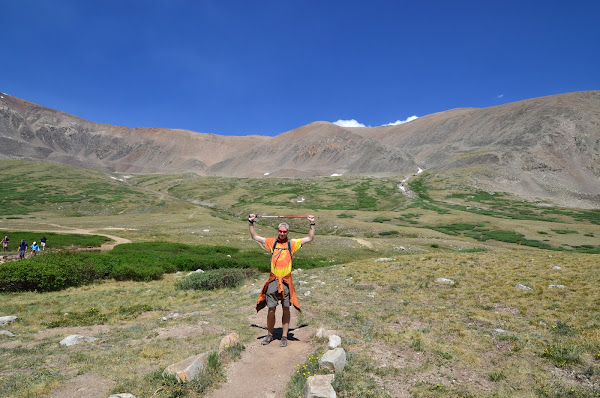 We definitely made the most of the time we had available.