I got shut out of the Moab Red Hot registration, so I looked to an old standby to fill my need for a February race.  I enjoy having a 50K scheduled in February.  It seems like just the right distance to train for over the middle of winter.  A good mix of quality workouts and long runs was my approach for the last two months.  I’m happy with how it turned out, but at the same time realize I have a lot more work to do.

I ran the Psycho Wyco 50k four years ago in 2008 (no way it has been that long…).  I was just starting my second year of running, and it was the first ultra that I actually tried to ‘race’ rather than just finish.  I had a great time and finished in 6th place out of 108 runners in 5:22 in very sloppy conditions.  This year I thought I had it in me to break 5 hours.  That was the goal.

The race is held at Wyandotte County Lake Park (hence, WyCo) and consists of an accurately measured 10.55 mile loop on hilly, rocky, twisty, and sometimes very muddy trails.  3 laps for the 50k. 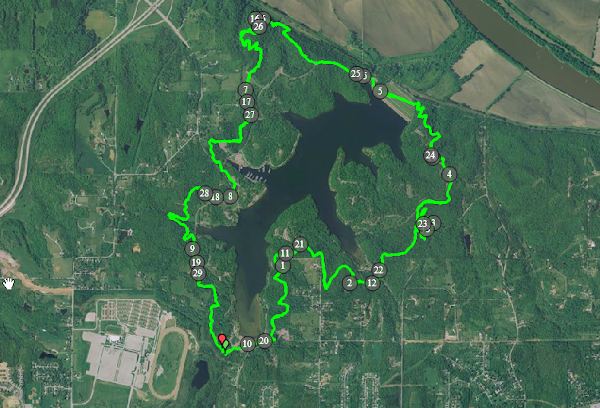 Normally, the Psycho Wyco theme is mud.  Lots of gooey, slippery, and sometimes very deep mud.  This year the conditions were dry with very cold temps.  A big storm came through a week prior to the race and saturated the course. 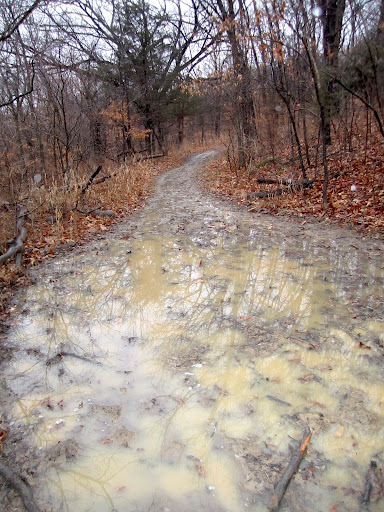 It dried out in time for the race, but was in rough shape in many spots.  The trail gets a lot of horse traffic, and all of the hoof prints had set up like concrete which called for some fancy footwork at times.

The elevation gain for the 50k is around 4,500′  Not terrible, but there’s enough climbing to work you over a bit.  The course record is 4:15, held by Andy Henshaw.

So I was wary about going out too fast and would try to hold a steady and sustainable effort.

Cold and clear was the order of the day.  It was 7 degrees with a -4 windchill as I jogged around the parking lot to warm up a little.  Ouch!!  I tried my best not to overdress, knowing that once we were in the trees and running hard I would warm up quickly. 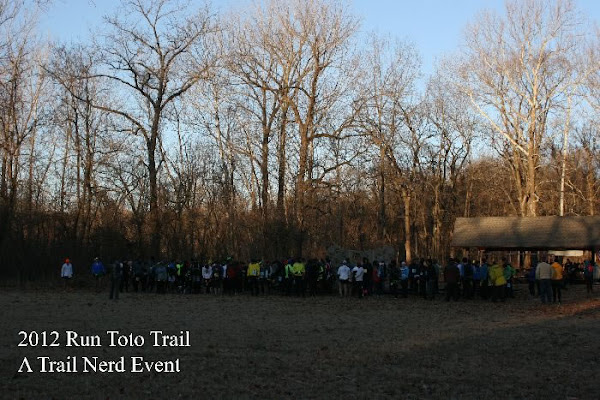 With 160 starters in the 50k, and who knows how many in the 20 mile race that started with us, it made for a large group gunning for the hole shot across a narrow bridge about 1/4 mile into the race.  Nothing too frantic, though.  Even though it had been 4 years, I still remembered the course well and felt comfortable with my effort.  A long climb strung things out a little in the first and second miles, then we hit the tracked up section with all of the 4-5″ deep petrified hoof and foot prints left over from the previous week.  Man, that was some tough running!  I imagined it sounding the like a 4th of July fireworks display behind me with all of the ankles popping and cracking.  Only with a lot more swearing.

I felt good.  My legs were pretty snappy and my breathing was fine.  I shed my jacket at mile 3 and stayed cool but comfortable for the remainder of the race.  Once we made it through hoofprint hell, the trail tightened up into some great singletrack.  I had a blast hopping logs and swinging around trees as I zoomed down the switchbacks.

Grabbing a gel at the 5 mile aid station, I realized one big downside to the cold temps.  It was almost impossible to suck the stuff out of the package, despite about 10 minutes of trying.  Later on, one aid station would get creative and tried to keep the gels warmed up for us. Taking cups of fluid also proved problematic as they froze to the tables.

After being so careful and staying upright in all of the difficult sections, I crashed hard as we ran cross country across a small grassy clearing.  I caught an embedded rock that was obscured by dry leaves with my toe and scored a direct hit with my kneecap on another rock as I pancaked on the ground.  Grrrr!  I was pissed!!  Back up and running before the guy behind me could even finish his Are you okay? sentence.  The knee hurt badly for about 10 minutes, then thankfully calmed down.

I danced up the biggest and steepest climb of the day, and finished the lap in 22nd place. 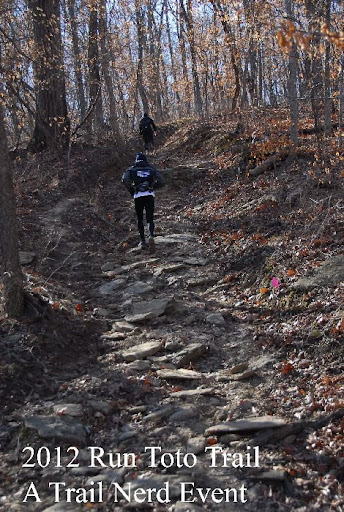 This lap was a lot of fun.  The sun was starting to have a slight warming effect, I was solidly in my running groove, and I was chasing and passing people here and there to keep things interesting.

The hills were still feeling easy to climb, and I latched on to a pack of 4 other runners for a couple of miles and got pulled along nicely.  They all stopped at an aid station while I continued on, now starting to deal with a lot of traffic from the 10 mile race that started 30 minutes after we did.  I had to remind myself to stay calm and not to sweat the extra effort it was taking to get around people.  Everyone else in front of me was having to deal with the same thing.  It was about equal parts frustration and inspiration, though.  It was very cool to see people out on the trails on a difficult day, doing their best to get it done.  I just wish I had a nickel for every time someone stepped to the left as I called out ‘passing on your left’.  I soon learned to call out earlier than normal, so I could have time to see which way they actually decided to move.  The race website has explicit rules against whining, so I’ll stop now.

Whiners:
Don’t come whining to us.  Whining is not allowed.  Trailrunning requires a slightly higher pain threshold, but this is balanced-out by all of the fun you will be having.  The Trail Nerds’ motto has always been: “All whiners will be buried in shallow, unmarked graves.”  We really mean it.  Why do you think the trees grow so big, in Wyco park?  Yup…you guessed it…lots of “fertilizer.” 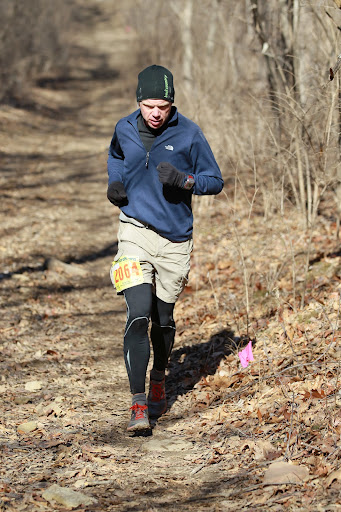 This lap started out great.  Finally, as I entered the woods again, I was looking up at an empty and wide open trail ahead of me.  The 10 mile runners were done and I hadn’t yet started lapping the back of the 20 mile pack.  I was maintaining my effort, and even feeling like it was time to crank it up a little.  I was in no-man’s land with nobody ahead or behind.  Time for a 10 mile solo time trial to finish this thing off, one of my favorite ways to run.

Although the trail surface was still dry, there was a layer immediately underneath that was getting mighty slick.  It seemed about the consistency of snot and axle grease.  I had to be careful in several spots to avoid another wipeout.

I hit an aid station for a bottle refill, which would be the last one of the day with 7 miles to go.  There was a VERY smoky fire burning right next to the aid station, and I guess the smoke was blowing directly over the open pitcher that my bottle was filled with.  For the rest of the race I was drinking water that tasted like someone had dumped a full ashtray into my bottle.  It was awful, but I needed the fluid so down the hatch it went.

With 5 miles to go I was treated to one of the worst bonks I have ever had.  A tsunami of fatigue swept over me in an instant.  I wanted to lay down.  NOW!  I stumbled badly half a dozen times in two minutes.  My legs refused to work and started cramping badly, especially my inner thighs which was a completely new experience.  Just like that, my time goal was vaporized.  Now I just had to make it to the finish.  I chewed another gel, swallowed a salt pill, and tried to get a rally going.  It was slow going.

After what seemed like forever, the finish line appeared to put me out of my misery.  5:09, 15th place.  3rd master. 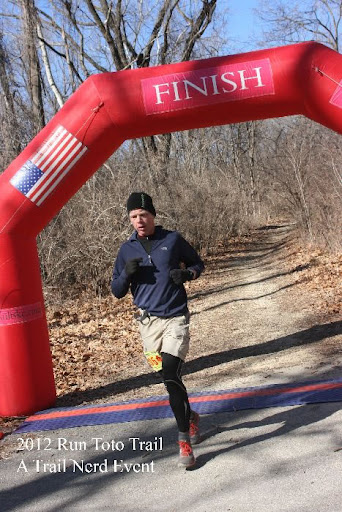 My emotions were mixed, but I was relieved to be done and mostly intact.  Up until the last 5 miles I truly had a fantastic time.

I was shooting for a 10 minute differential between my first and last laps.  Ended up with 19.  It could have been worse:

Second place was at 34 minutes!  Clearly the winning strategy is to go out hard and hang on.  It’s quite rare to see a 10 minute or less spread.  A couple kept theirs to only two minutes!

I’m betting it was a combination of factors.  Partly a classic calorie shortage brought on by the difficulty getting gels down in the cold.  I also probably underestimated how hard I was working and how many calories I should take in due to the low temperatures.

The first 20 miles look perfect.  A 161 average heart rate may have been ever so slightly too hard of an effort, but it sure felt reasonable at the time.  A very consistent picture (heart rate and elevation shown):

The next graph tells the story.  You can see the drop off starting at mile 20 and bottoming out in the last 5 miles.  I only averaged a heart rate of 144 in that section!  That is exactly the time I should have been winding up for the finish.  Instead, I was barely jogging.

I was left with the sense that I had done a lot over the winter to get ready for this race, but had stopped short of doing everything I could.  It changed my thinking from doing the least I can get away with, to doing ALL I can to get ready for the next one.

I had a great day at the race and would absolutely go back to do it again.  The race is put on by a very experienced group of trail runners and it shows.  The volunteers were the best you could ask for, the timing and results were immediate, the shirt/mug/medal were great, and you also get TONS of FREE photos.  Much better than some races where they want $80 for your pics (cough, Boston).  The course is a lot of fun and is a great early season test.  I’ll give myself a B- on this one.  Work to do!!

I ran in the New Balance MT110 shoes and could not be happier with them.  They have just enough protection without being overkill to get the job done.  They did hang on to the mud a little, but that was some nasty stuff.  Sticky and slippery at the same time. 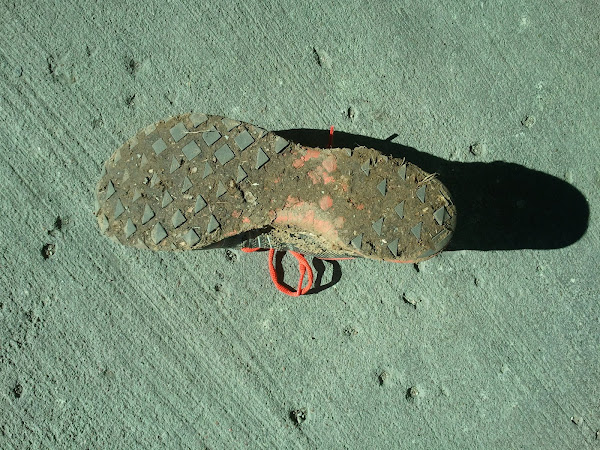