Despite being in my 5th year of running, and only living 2 hours away from Buena Vista, I had never been able to line things up in order to run the Collegiate Peaks 50 mile race. Part of it was scheduling, and part was apathy. For some reason I was under the impression that this was a ‘boring’ course and maybe wasn’t really worth the time and effort. While the course is definitely not twisting singletrack swooping through the aspens, I ended up loving it. Most of it was dirt road of the decomposed granite variety – but the topography and views were most excellent! 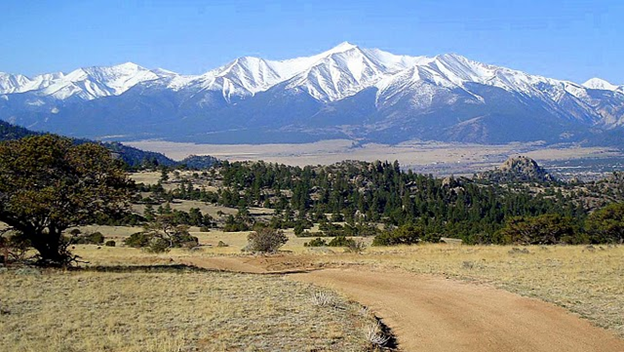 I headed down to BV after work on Friday and settled into a nice campsite, that actually ended up being right on the course at the mile 20/30 point. I scooted into town in time for the pre-race meeting which had some good info on the course markings (orange tape, red pin flags – which would be at turns arranged on the inside of the corner), and got to say hi to Speedgoat Scott for a bit.

I had read a few reports of runners getting lost on the course in previous years, and some cases of vandals removing the flagging. This motivated me to do some actual homework in the week leading up to the race and I used the course map along with the written directions to memorize the layout using Google Earth. I also made up a small cue sheet and map that I kept with me as a backup. Probably overkill, but it made for one less thing to worry about during the race. The course was well marked and I didn’t have any issues in that regard, but it is located in a web of roads and trails with many intersections so it pays to be a little bit careful. 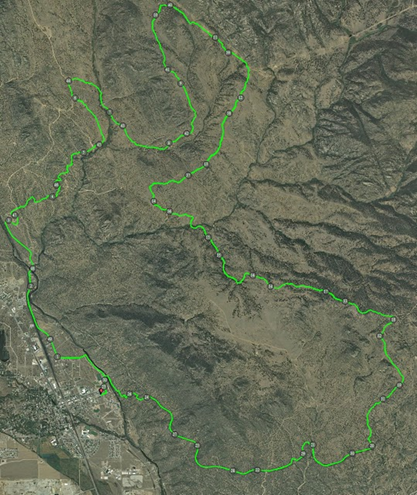 I felt great on race morning and enjoyed running with Jody and Scott in the early miles. My expectations were modest based on my fairly light (but consistent) training for the year. I still hadn’t hit 900 YTD miles which worked out to a 52 mile/week average after starting cold from a foot injury layoff last fall (plus about 500 miles on the bike). I felt like a realistic target for me at this point was somewhere in the 8:30 – 9:00 range, and maybe a little faster if things went well.

Well… Things didn’t go well. As soon as the climbing started at mile 3, I felt a familiar tightness in my left calf. Usually, by backing off the pace and changing my stride I can get it to relax a little. Not so this time. I slowed down even more, and tried to loosen it up on the short downhills that were present in the climb. No luck. It just would not go away. After dealing with it for quite a while, and giving it ample time to let go, I finally stopped at mile 12 and spent a few minutes gently stretching it out. When all else fails, this does the trick and I can run without any problem most of the time. Not today.

I felt two small pops in my lower left leg and with the associated pain, knew my race was over. I’m not sure exactly what gave out, but it hurt.

Aid station #3 was close by, but for some reason I didn’t stop there. It seemed fairly remote in terms of getting a ride back to town anytime soon, and I figured I could just walk the rest of the loop (10 more miles), or get a ride from an aid station that was a little more accessible. Going uphill, which stretched out the calf, was very bad. I had to walk slowly to the high point of the course taking an hour to cover that 3.2 miles to the next aid station. I think I was passed by roughly 2,936 runners in that section. It didn’t matter, though. I was just trying to get back to town so I could drop out.

I grabbed a handful of cookies at the top of the climb and continued walking as the course started the 7 mile descent to finish out the first 25 mile loop. I discovered that walking downhill actually wasn’t too bad – relatively speaking, of course. Soon I started shuffling, then jogging, then I was running again. Hmmm…

Coming into town I was having a blast! I saw several running pals as they were heading back up the climb on their second lap and gave/got high fives and many encouraging words. Awesome. It was a beautiful day in the mountains to boot. Except for the throbbing leg, my slower pace left the rest of me feeling fantastic! I realized that I didn’t want to stop at 25 miles.

Knowing I’d probably pay dearly for it, I decided to hit the turnaround and keep on going. I reasoned that it was about 3 miles back uphill to the next aid station. If things were really bad, I could easily drop out and get a ride there, or simply turn around and hike back down. I also rationalized that the damage was already done – I may as well enjoy the day the best I could. Plus, dropping out SUCKS SO BAD!!! I’m still pissed about dropping out of Leadville 72 miles into the race 3 years ago – and I’ve since learned to embrace the suck. Onward, then.

Climbing was no picnic, but I was able to jog the easier grades and then resorted to hiking when it got steep. This might work. I don’t want it to sound like an endless painful grind. I had a pretty good pity-party earlier when the leg popped, but got over it and was really enjoying my day for the most part. I just had to slow down and tread lightly.

Everything else was perfect! The weather was spectacular. I had no problems with the heat, or blisters. My feet felt great. My energy levels were as good as could be expected. It was no walk in the park, but I was managing to cover some ground. Hydration was good. Electrolytes were good. Fuel was good. I stayed focused on taking care of myself and moving as well as I could. 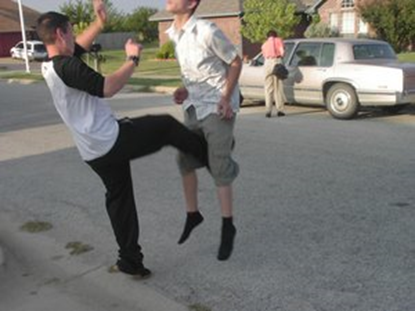 I did have plenty of time to contemplate whether

I should save my race entry fees

and just get someone to do this for free instead.

Time passed quickly for some reason and I even managed to go by a dozen or so runners in the final 10 miles. Once I topped the last climb I ran as fast as my leg would allow for the final 90 minutes and crossed the line in 33rd place out of 90 finishers in 9:17 (results). Very satisfied with that considering the circumstances, and my second lap was only 9 minutes longer than the first.

This is what the leg felt like on Sunday morning.

It remains to be seen what the final toll for finishing this run will be. 5 days later and the swelling is finally subsiding a little and I am able to walk without too much problem, but running is out of the question for a while. The rest of my body felt cheated. Not sore at all. I was looking forward to being absolutely hammered from a good, hard effort. Not to be this time.

I truly had a very enjoyable day. It was great to see so many friends and watch most of them absolutely rock that course. Can’t wait to do it again!

And to paraphrase Jack Handey:

I bet if you were in some old west gang, and you were dragging a guy along the ground with your horse, It’d probably make you really mad to look back and see him reading a magazine.