The 24 Hours of Moab is a race with a lot going on.  In addition to the 24 hour event (which is run as a team relay or solo), there is a 100 mile race, 12 hour team or solo, and a 6 hour “fun run”.  The course is a 5.4 mile loop around a giant mesa about 15 miles north of Moab.  While the course wasn’t extremely difficult, it was definitely harder than I expected.  The first and last parts of each lap were rolling to flat dirt, about equal parts road and trail.  With a few stretches of deep sand to keep things interesting.  The middle half of the loop was a long climb on bumpy slickrock, with a short flat stretch, and then a long descent on slickrock.

I hadn’t raced an ultra since the Leadville 100 in August of last year.  I hurt my foot in September and ended up logging a whopping 200 miles combined total over October, November, and December while letting it heal.  I started training again on January 1st not really knowing what my first race would be, just playing it by ear.  While I had only averaged 45 miles per week so far this year, I had been getting in some solid long runs and soon felt the need to scratch the ultra itch.

This race appealed to me for several reasons.  I was able to sign up for it at the last minute, and with the loop format I would be able to drop out at any time if any of the old injuries flared up too badly.  The nice thing about a timed event like the 12 hour race is that there is no DNF.  There is not a set finish line, so you just run for as long as you can – then your total miles within the 12 hours determines your placing.  Moab was also close enough that I was able to keep the time away from home at a minimum.  I was treating this race as a rust-buster type of training event.  I took a couple of days off before the weekend, but didn’t do any other special training or tapering for it.

My goals were pretty simple, they revolved mostly around the 50K and 50 mile intermediate splits.  I hadn’t done a run like this in so long I wasn’t sure what I could expect from myself.  I figured I would run solid through 50K, then cut back and coast through 50 miles.  Anything on top of that would just be gravy.

I normally race in La Sportiva shoes, but decided to go with my New Balance MT101s for this race.  Mainly because I’ve had so many problems with my heels and I wanted to cut the back of the shoes to relieve any potential rubbing or irritation.  I’ve done this to other shoes in the past, but it is a huge pain.  Major surgery to remove all the glued-in plastic at the heel.  The 101s are so light and thin, and the heels are just made of foam without any plastic.  It was a simple job to just slice out a section.  I then glued some fabric over the holes and covered that with duct tape.  Ghetto for sure, but wanted to give myself any bit of help that I could.

I didn’t feel particulary great on race morning, but not too bad.  It was cold out in the exposed desert for the 7am start.  For the first 15 miles I struggled quite a bit to find my groove.  It felt like my legs were disconnected from my brain and just not getting the signals I was sending.  I held back, which was the right thing to do, but maybe it was a little too much.  I should have just relaxed and let my legs do their thing.  On last Monday’s run I had stepped hard on a sharp rock in my VFFs right in the center of my forefoot.  That pain dissipated after a day, but still remained very tender to the touch.  Well, I managed to nail that exact spot 3 times on the first lap.  Geeeze!!  Needless to say I wasn’t too happy about that.  I felt a huge blister forming on the ball of my left foot, my heels were hurting, and my shoes were full of sand.  In short, I felt like crap and I was barely any farther along than what I would consider a normal daily training run.

I do have to say, for not feeling that great, I sure seem to know how to be consistent.  Every time I run a loop course I seem to peg a certain lap time over and over again.  Even on this course which had all sorts of variety and alternated direction with each lap I ran the first 4 laps (20+ miles) at 53 minutes each with a heart rate average of 148 for the first two, and 154 for #3 and 4.

After those laps I made a 2 minute stop to reload my pockets with gels and then ran a bit harder for the next 10 miles with lap times a couple of minutes quicker and my heart rate averaging 157 and 160.  That really seemed to be the sweet spot for me and I felt a whole lot better in that section.  I pushed fairly hard on the lap where I averaged 160 and hit the 50K split in 5:09.  Not setting the world on fire, but pretty good for me.

Once I passed the 50K mark, I rewarded myself with a 5 minute stop to change socks and dump about 4 pounds of sand out of each shoe.  The feet were feeling ok, and the heels were limiting me a bit – but I couldn’t complain about how I felt in general.

The next 3 laps were all 61 minutes as I coasted along with a heart rate average for that section in the 140s.  I didn’t really run by my heart rate, but seeing the averages now matches up pretty well with the effort level I was putting in.  I had run everything up to this point and crossed paths with Brownie at around mile 35.  He let me know I was in the lead for the 12 hour race (there were so many runners on the course for the different events it was hard to tell who was doing what).  While that didn’t exactly light a fire under me – ok, maybe a bic lighter – it was enough to make me decide to keep on running through mile 50.

I haven’t run all that many 50 milers and at mile 45 when I saw the clock and realized that I could tag what for me would be a really good 50 mile time I pushed a bit.  The start/finish area was full of people and music.  It was fun to be announced by name coming in and recognized as a solo racer.  I felt good and popped right back out on the course without filling my bottle knowing that I would hit 50 miles before the unmanned water station on the far side of the course and could fill up then.

Onward I pushed, smoking my legs in the process.  My iPod shuffle really let me down in this final stretch.  I need to make a real playlist rather than just letting it decide.  Typically, I’m always skipping songs or hitting repeat on one that I like.  I have a rule on long runs where I just let it play and take what comes, though.  So I was hauling down the trail listening to Celine Dion singing some lullaby song in French.  I’ve never even heard that before, where did that come from?!?!?  Despite the sucky music I hit 8:44 (a 35 minute PR) for the 50 split and rewarded myself with my first walking break – which lasted for the next two miles!  Not a smart pacing strategy for a 12 hour race, but I was more interested in my own race-within-the-race at that point and was happy to have that time in the bag.  I now knew that I could run 50 miles based on a couple of month’s worth of 45 mile weeks.  Not ideal for sure, I hope to go a fair bit faster in the future, but I think I definitely outran my training on this one and was happy to be in that situation for a change.  I’ve certainly under-performed relative to my training on many occasions.

After the 2 miles of walking which included the main climb, I started back to a walk/jog combination for another mile and then was able to resume an easy jog for the rest of the lap.  With the fast first half of the lap and very slow second half I ended up with a 1:15 lap time.  I put in one more easy 1:15 lap for good measure and then pulled the plug at just a hair under 60 miles in 11:05.  That total was enough to make me the overall winner of the 12 hour race.  Not what I set out for, but I’ll take it! 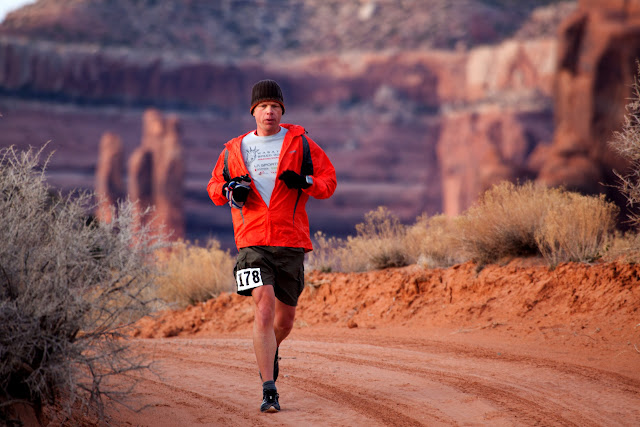 I hung out for a while cheering runners and waiting for the awards ceremony, and heard the quote of the day.  A little girl that had obviously been waiting for many hours in the cold while her dad was running the race shouted at her mom, “I hate waiting for daddy to run!”.  The mom shot back, “Well, I’m sure daddy hates running 100 miles too!”.  I had to try hard to keep from busting up at that exchange.  Hanging out there for a while gave me a first-hand appreciation of those that wait on and support their runners during events like this.  I love my family too much to put them through that kind of torture…