What to do with a 4 day weekend in February? Go to South Dakota, of course!

When things started coming together for a weekend getaway over Presidents Day weekend, I never imagined we would end up driving north. I wanted to go somewhere within a 4-6 hour drive so we wouldn’t spend all of our time on the road. New Mexico was looking to be the likely choice, but after checking forecasts for several days it looked like the weather would be a mixed bag. Fairly cold and somewhat unsettled. That wouldn’t have been a huge deal, but the weather up north was looking so much better that we decided to head that way.

I’ve only driven past the Black Hills before and have always wanted to go back and explore that beautiful slice of the country a bit more. With a Saturday forecast of sunshine and 50 degrees, the deal was done.

We boarded our dog Thursday night so we could get a nice early start on Friday morning, with the goal of getting to Wind Cave National Park in time for the final tour of the day. It turns out I botched the tour schedule on the website and was off by 30 minutes, but we arrived 45 minutes early so we were all good.

The place was empty, it being a Friday afternoon in February, and we had the awesome experience of being the only ones on the tour. The ranger was in no rush and took plenty of time with us to answer questions and tell us a bunch of cool stories and anecdotes. It was great!

First discovered opening to the cave.

The tour was only 1/4 mile, but at just about an hour long, it seemed just right. They have actually mapped 120 miles worth of tunnels and are still exploring. There are teams that head down to an advanced basecamp of sorts and spend 3 days at a time working out the new passages. Cool stuff.

The tour guide came to the part where they turn off all the lights and have you stand there in the pitch black darkness. As we were standing there talking, she told us to all be very quiet and we would experience something that the early cave explorers got to experience. The ranger was meaning the absolute silence, but after we had been quiet for what seemed like a long time with no sound at all in the darkness Jessica piped up in a quivery little voice and said – fear?? It cracked everybody up including the ranger. Jessica was so sincere, but it was too funny.

After the tour, we drove through Custer State Park at sunset on our way to Rapid City. We stopped and watched a huge herd of elk, 28 bulls total. They were taking turns sparring and put on a great show for us. 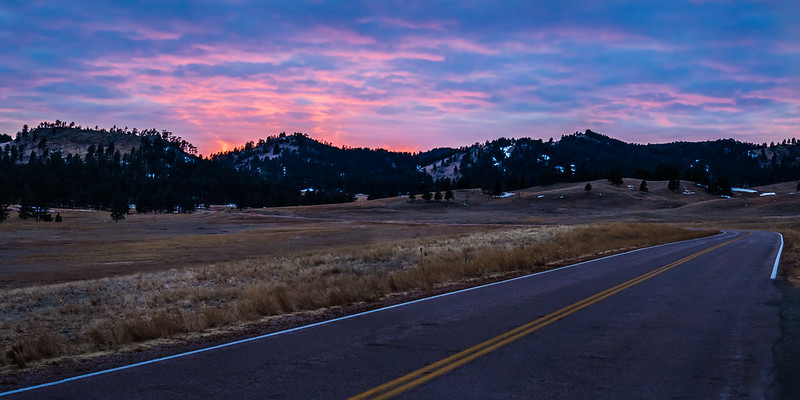 Posted on March 12, 2013, in family, photography. Bookmark the permalink. 1 Comment.