The Shot of The Shot

I understand the basics pretty well from a taking a couple of photography classes in high school.  I shot with my Dad’s Canon AE-1 SLR (this was late 80s) and learned all of the B&W darkroom processing techniques. 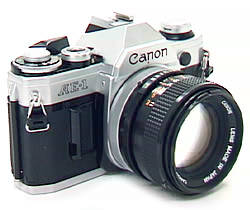 I have owned a series of point-and-shoot digital cameras since the late 90s.  I remember the first one cost about $400 and had something like 16MB worth of storage.  It eventually got ruined when a rechargeable battery leaked acid all over the inside.  Ouch.

From there I progressed to the the first Canon Elph which was incredibly small for the period (2001-2?).  Very boxy and had bombproof metal casing.  I shot a ton of pics with that one.

I have had a few other cameras in recent years, and have been pleased with many of the running and backpacking pictures I’ve been able to get with them.  Running my son’s first trail marathon with him, shooting 300 pictures and 90 minutes of video during the Bighorn 100, and MANY other races, hikes, rides, etc.  Regardless of the technical quality of those shots, the memories they have captured are truly priceless.

That said, I have always liked the thought of getting  a DSLR and the added dimensions to picture taking that they can open up.  Cost was historically the biggest deal-breaker, as well as not being current enough on the specific technology to make an educated decision on what to get.  All along I have been a student of great photography, though – and have tried to appreciate not just the pictures themselves, but what it took to capture them.  For the last few months I have been reading everything I can get my hands on regarding the current crop of DSLR cameras.  It took a long time to arrive at my decision, but I think I found the sweet spot for me in terms of price, performance, capability, and quality.  I sold off a bike and took the plunge.

The gear arrived during the week and on Saturday I was ready for my first ‘shoot’ (that’s what it’s called when you go somewhere and take a cr@pload of pictures, right?).  I had spent next to no time on the camera and it would be a learn-as-you-go kind of day.  I have 3 lenses to work with; the long 55-300 would be out, but the wide angle zoom (28-55) might work depending on the lighting and the 35mm prime (1.8) would be the workhorse.

About 5 minutes before leaving the house, I skimmed this article quickly and found some good pointers that would come in handy.

I quickly learned that shooting an indoor basketball game is one of the most challenging environments you could ask for.  Poor lighting and a whole lot of motion made it a game of trade-offs.  It was like constantly having to solve a puzzle to get things just right, and I loved it!  The balancing act between needing a fast shutter speed to freeze the action, but requiring enough light in that fraction of a second to get a good exposure (no flash) made for a steep learning curve.

My white balance settings were way off to start with.  Too yellow.  I started with the WA zoom, and try as I might, it was just too slow for these conditions.  The biggest mystery to me was how high I could crank the ISO and still get away with a decent picture. 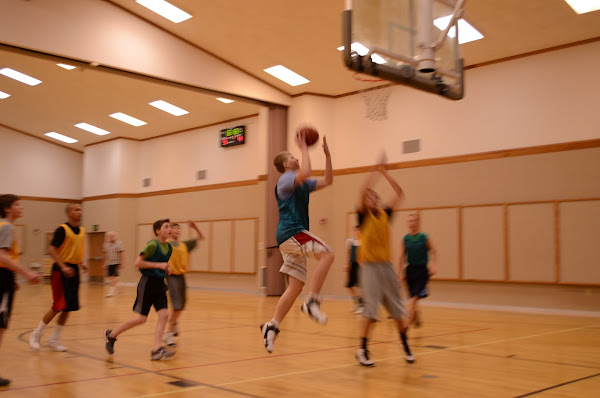 I got the white balance adjusted, and swapped out to my Nikkor 35mm f/1.8G. Shooting with it wide open and with ISO in the 1600-3200 range I could get the 1/400-1/500 shutter speed I needed to stop the motion.  That is a great lens, but on a DX format the lens is really a 52mm equivalent due to the camera’s sensor size.  This made it a little tight for where I was shooting from. 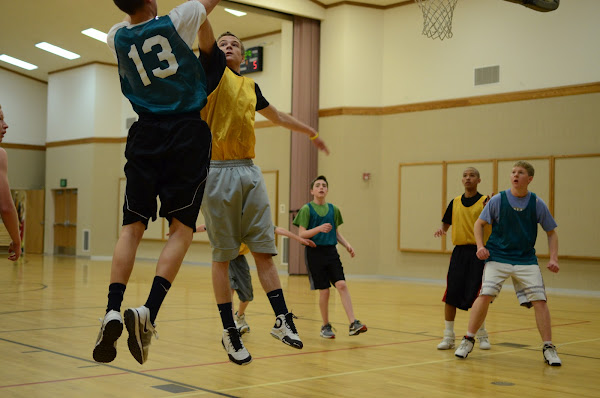 Would have made a nice shot, but was a little too close to the action. Should have taken more of these vertically.

The game was a dud for the first half and much of the second.  Our team trailed by as many as 14 points.  AM did great to keep them in range until AW caught fire late in the second half and scored on drive after drive. 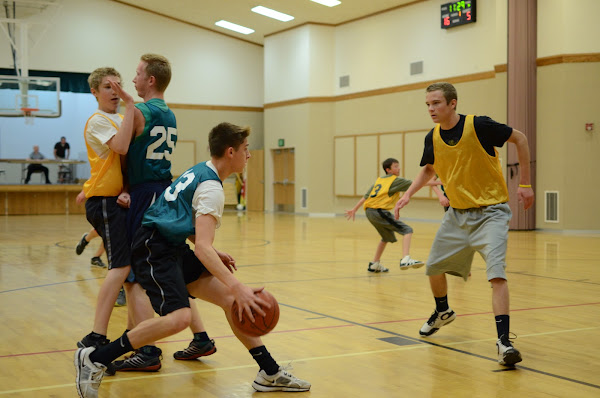 Malcolm sets a pick while AM tries to keep them in the game. Down by 11 early. 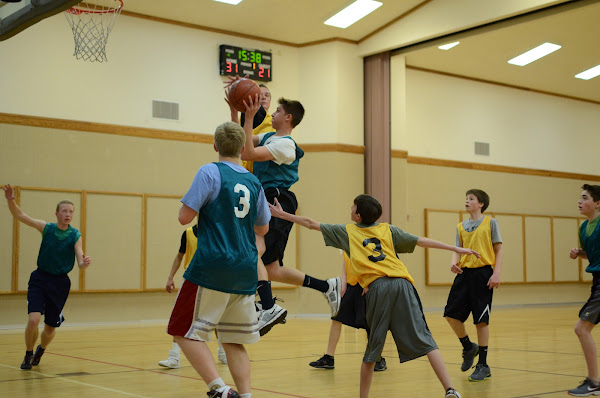 AM still at it early in the second half. Still down by 10.

I felt like I was getting some better shots now, too.  Continuing to press the ISO envelope to keep the shutter speed up where it needed to be.  I probably should have played around with the Exposure Value to try and lighten things up just a touch, the pictures are still just slightly dark. 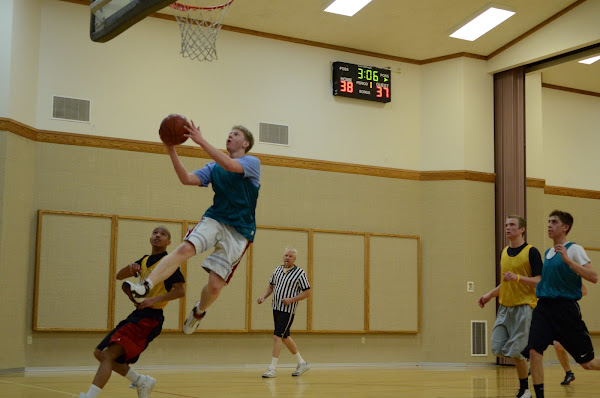 One thing I had forgotten about was that this lens was non-VR (no Vibration Reduction).  It’s not really an issue on this fast of a lens under most conditions, but I think might have helped here.  I had to remind myself to stay as steady as I possibly could.

Next thing I know, there was a chance the boys could take it.  Things were heating up and the crowd was really getting into it.  With just over a minute to go, Malcolm drained what would be the game winning shot.  Final score 41-40.  It was awesome! 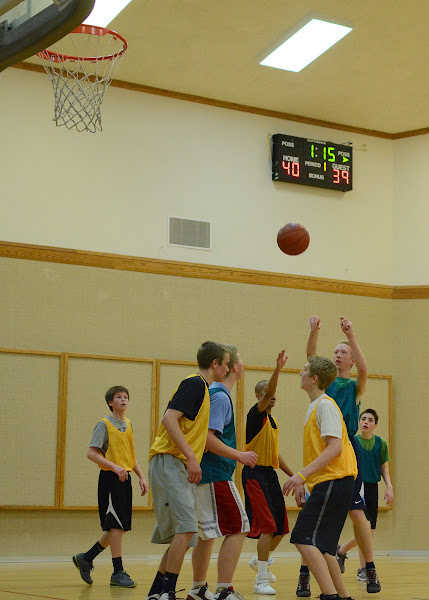 Vertical crop of a horizontal shot. Wish I could have gotten all of the feet in, but it was pretty cool to capture the game-winner with the scoreboard in the background.

The other team got organized for their final play and actually made a very good attempt, but the shot bricked off the back of the rim and that was it! 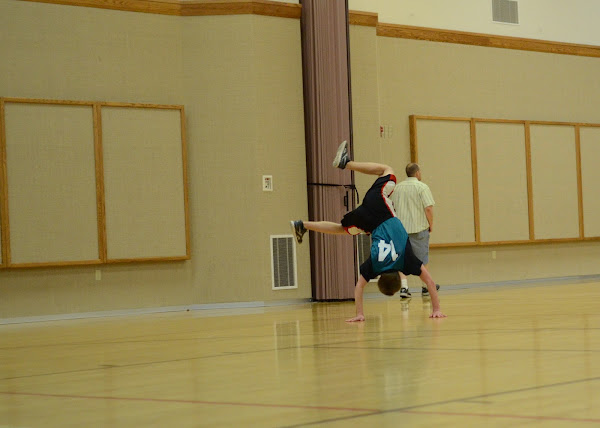 JW put on a celebration clinic.

That win put them into the final later in the day.  A couple more boys showed up for this game that weren’t able to come to the first, and they were able to cruise to the victory fairly easily.  Well done! 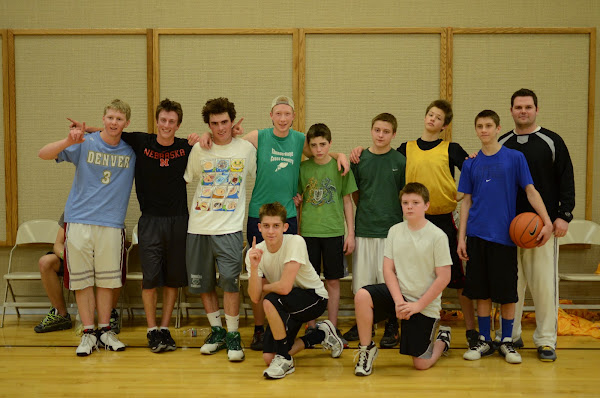 I learned a ton and had a blast.  Definitely have a LONG way to go, but am enjoying the process.  I can already tell this is going to be a fun ride.  Next time I shoot in similar conditions I will look to bump the EV, and maybe shoot RAW to allow for some more lattitude with post-processing.  I didn’t do anything to these photos after the fact other than a crop here and there.  I need to get a better handle on the focus options as well.  Most of the time I went with a single point (center), but that had some mixed results. 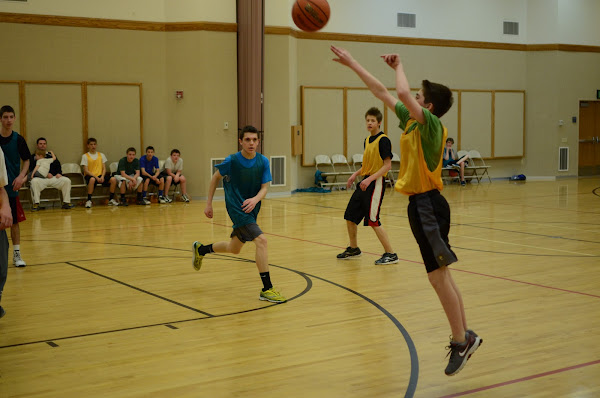 DH's awesome 3. The center point focus worked against me here, though. He's slightly out of focus while the center is sharp. The tight space worked against the lens, too - cutting off the top of the ball. f/1.8 1/500 1250 ISO, still dark. Should probably have cranked ISO to 3200 and just left it there, accepting whatever noise came along with it.

I’m not posting this because I think the shots are all that great, because from a technical perspective they are most definitely not.  They did capture some good moments and I hope to be able to refer back to them in the future as I try to improve my results.  I ended up taking over 600 pictures in 2 hours and can’t wait to do it again.

Posted on March 20, 2012, in photography. Bookmark the permalink. Leave a comment.