Ok, not a ‘real’ race, but it seemed best to file it under a race report.  The PPPP50K is a Fat Ass event put on by Team CRUD in Colorado Springs.  Just over 30 miles and around 8,000′ feet of climbing were the stats for the main event.  I missed out last year and was very happy to be given the chance to make it down for this one.

I stopped for some supplies on the drive down, and smiled at the sunrise on the mountains.  January??  It was going to be a spectacular day. 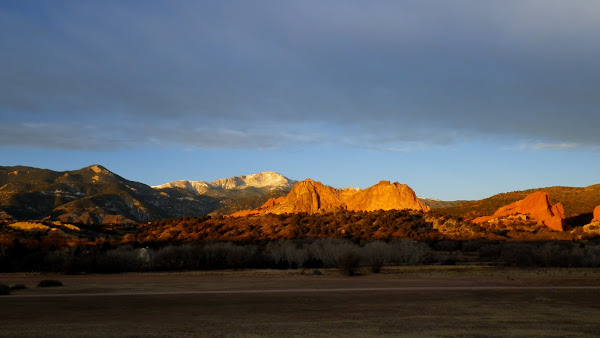 Three different start times were offered (7, 8, and 9), and I chose the 08:00 group.  It was great to see and catch up with so many friends and familiar faces.  Ultra trail running is definitely alive and well in these parts!  After 1/2 mile warmup on the roads, we hit the nice dry dirt and started climbing up and over some small ridges.  I was happy to be feeling good after a rough day on Friday, and knew the full route was on (I had been wondering whether I would need to cut it short). 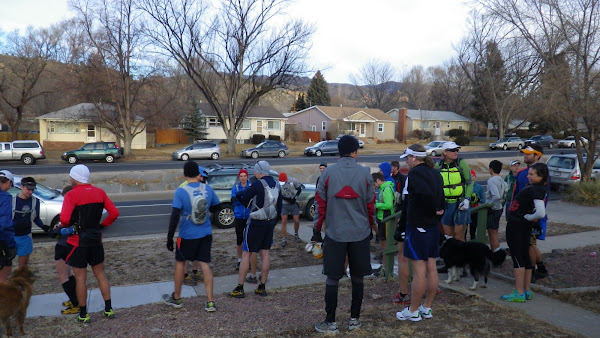 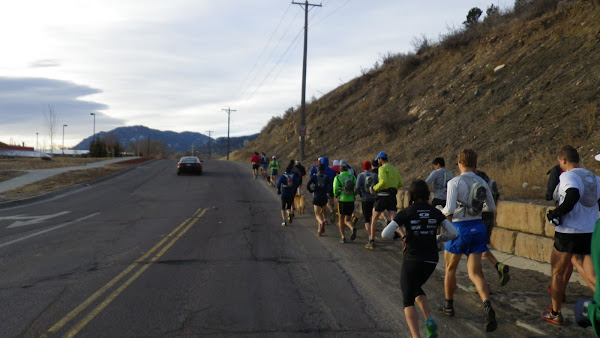 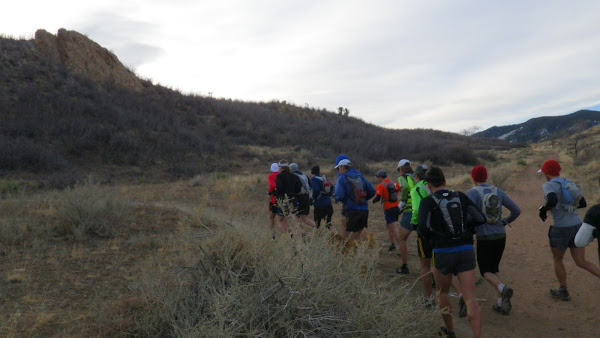 I was working hard, but happy to even be running in the same zip code as these guys.  I thought back to my first-ever double digit run.  A 12 miler exactly five years ago this same week in January.  That little run literally crippled me for several days.  Very surreal to be staring down the barrel of a 30 miler like this one and thinking of it as just a training run.  Go legs, go!

Our first of many vertical challenges came in the form of a short side trip up Red Mountain.  A quick regrouping took place at the summit, before we bombed back down grabbing on tree trunks to swing around the switchbacks.  I enjoyed some good conversation with Steve which made the time fly by.  We also got a great preview of our next objective.  The Incline. 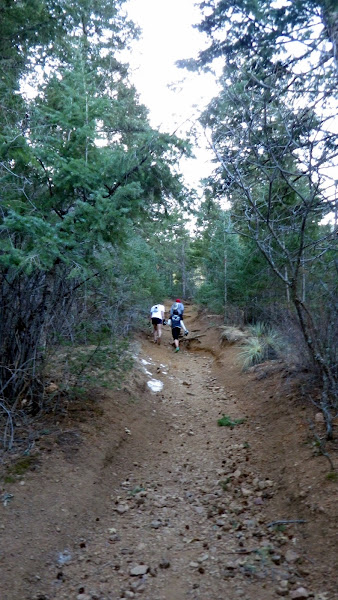 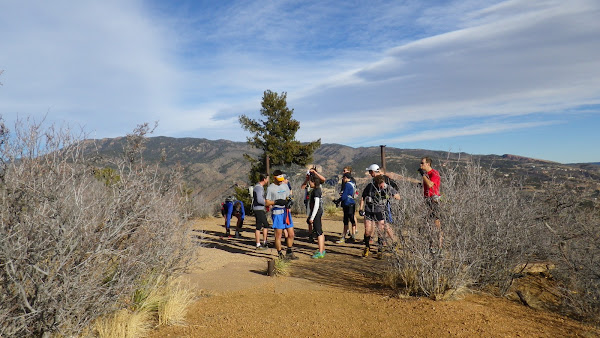 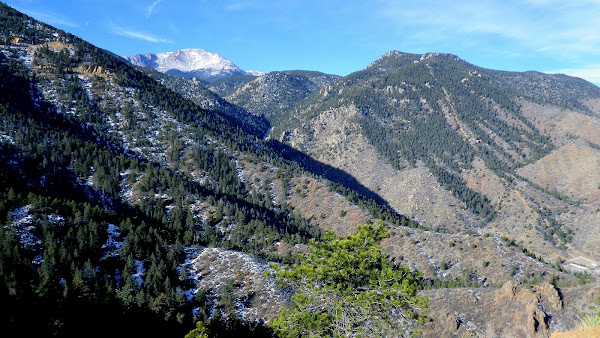 You can see the scar on the mountain in the right of the photo.  Roughly 2,000′ elevation gain in one mile. 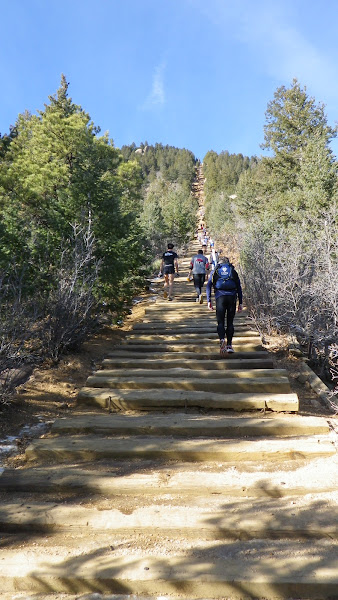 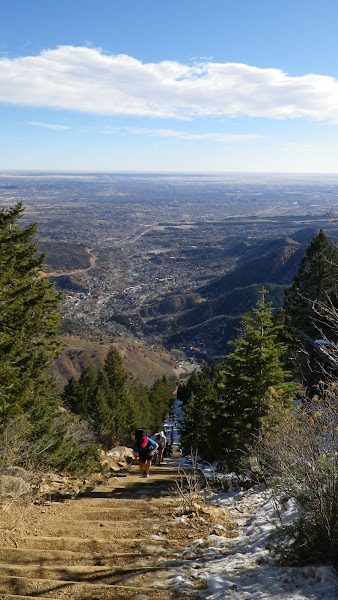 The pictures just can’t do it justice.  My goals were to keep moving, and not use my hands – which almost resulted in my tipping over backwards in one spot.  Steep!

The reward for reaching the top was an outstanding view of Pikes Peak, some 9 miles away by trail. 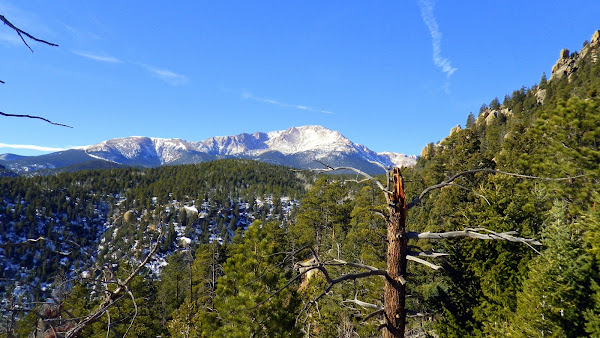 Ryan and Jeremiah led the way on the snow covered descent that seemed to go on forever down to the aid station. 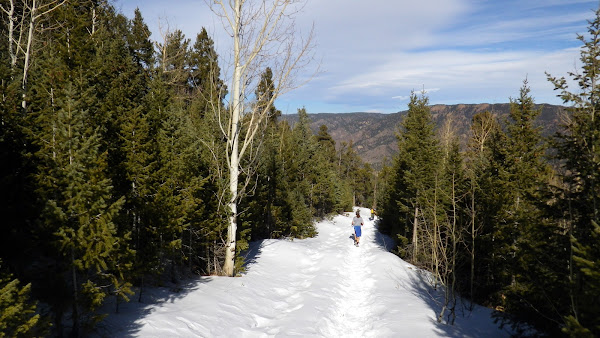 I hung out for about 10 minutes taking time to dump some rocks out of my shoes and fill up my bottles. 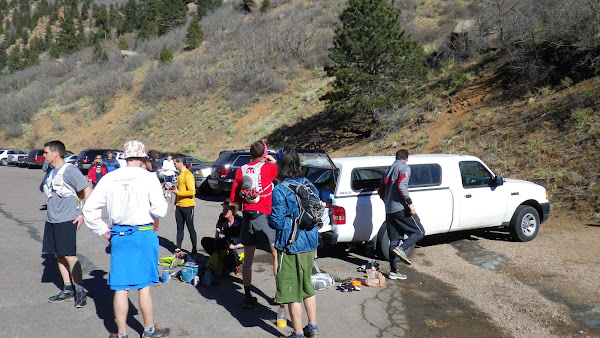 The course was marked very well, better than a lot of races I’ve done.  I imagine Team CRUD’s tactic of filling trail markers with dog crap cuts down on vandals removing the flagging…

Seriously, though – the markings were great.  Just a few flags at each intersection kept us right on track and were a big help.

After spending the morning running and chatting with others, I was alone for a few miles and settled into an easier pace and was really enjoying things until wiping out hard on a patch of ice.  I thought my shoulder had been ripped out of its socket for a minute, but a few windmills and chicken wing moves proved it still worked.  I was a bit more careful after that. 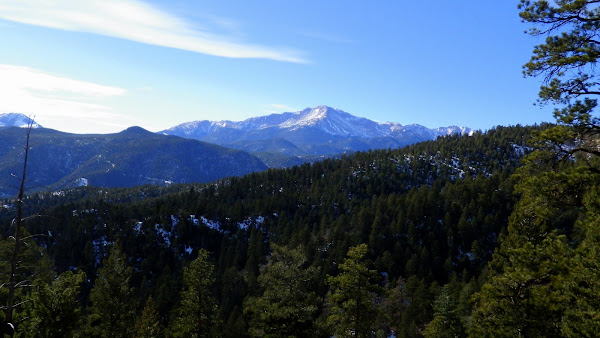 After a final look at the peak, I focused on the plains ahead which were a welcome sight at this stage of the run. 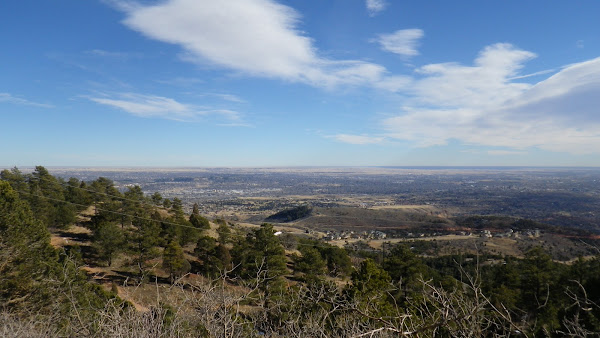 Several miles of downhill 7 minute pace chasing Leila, Ryan, and Jeremiah left me feeling pretty worked and ready to be done, and I was glad to see the dozens of cars lining the street signaling the return to JT’s house.  I finished the run in 6:28 and immediately chowed down a huge plate of pasta, chips, and cheetos.  I was starving!

Couldn’t have asked for a better day on the trails.  The weather, terrain, company, and course were all fantastic! 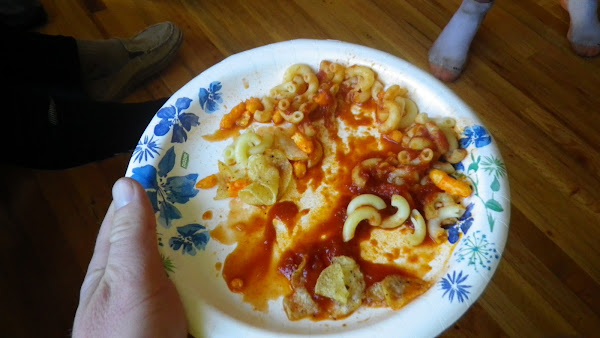 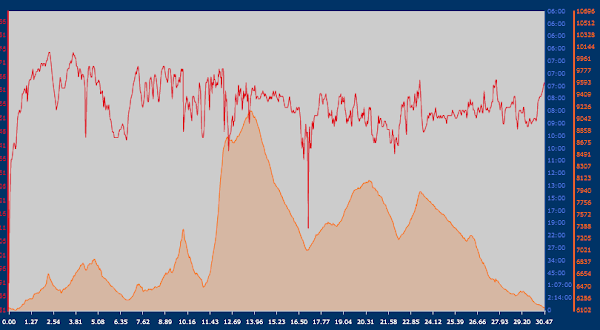