We made a trip up to South Dakota in February and had great weather for a weekend of seeing the sights. Really loved the Black Hills area.

This is Frisco, CO. I made a detour on one of my trips up to Leadville and spent a cold evening getting some photos of the town.

This is Sharptail trail. It starts 3 miles from my house and always offers up some great views. You know it’s a good day when the sun is only coming up after you’ve hit your high point for the day and you are on the way back home.

I did a ton of driving with my oldest daughter earlier in the year as she worked on getting the 50 hours of required time behind the wheel before getting her license. Of course I always brought the camera, and often came back with a great shot of something. The double-rainbow from Lookout Mountain will be hard to top.

Roxborough State Park. Close to home, and one of my favorite places of all.

I grabbed my gear and took off driving when I heard the news about the Black Forest fire. It took me a while to find it, but I’ll never forget the feeling I had coming over a hill on a country dirt road and seeing this sight at sunset. It was beautiful and terrifying all at once. The fire would go on to become the most destructive in Colorado history.

Roxborough State Park again. I saw this flower while driving out of the park after sunset and used my car’s headlights to light it up for the shot. I took this while sitting in the dirt with my back against the car bumper.

I love a good sunrise. Especially one where I am already out on a trail and get to see it develop over time. This was taken on day two of our 14er trip, on the way up Missouri Gulch. Man, that trail is steep!

This is a Bristlecone Pine estimated to be over 1,000 years old, overlooking the town of Alma, CO. I have long wanted to get up there and see them, and finally made it happen this year. It was well worth the trip!

And one of my favorite places of all, I just can’t get enough of the Moab canyon country.

I’ve enjoyed looking through my 2013 photos and thought I would post some from a few different categories.  My shooting has dropped off dramatically in the last half of this year, so I had been thinking there would be slim pickings when it came time to go looking for something to post.  I was pleasantly surprised to have a bigger supply than I had imagined.

One thing became very obvious when looking through an entire year’s worth of shots.  Wildlife photography is my strong suit, and what I spend most of my time doing with the camera.  I enjoy different kinds of shooting, but definitely feel most comfortable wandering the woods and hillsides looking for wildlife.

I’m kicking the series off with ‘People’.  That’s kind of misleading, because it’s mostly just my kids.  While I have a pretty good supply of people shots from portrait shoots and other gatherings, I’m not always comfortable with posting pics of others.  Animals are easy because I don’t have to worry about permission issues…

Kids at the amusement park. This ride was going around at about 10,000 mph, so I was happy to get a shot with all of them in the same frame.

A self portrait in Red Rocks park.

Sadly, I only shot one race all year – and only part of that one. 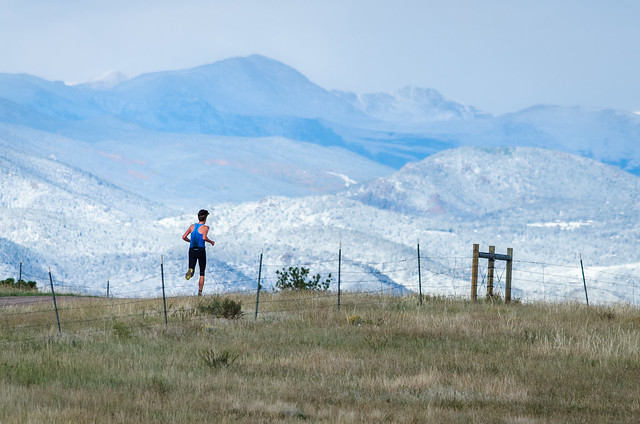 Malcolm got me a pair of remote flash triggers for Christmas, so we took a hike up Green Mountain the other night and tried them out. They open up the door to a lot of creative possibility, because I no longer need to have the flash attached to the camera.

Didn’t post last week’s training – pretty routine stuff.  40’ish running, and a good bike ride.  I did start working out on the rowing machine and I am surprisingly loving that.  It seems to be a great compliment to running and kicks your butt without breaking you down too much.  Working my way down to a sub-20 5,000 meter before too long.

Busted out my biggest ever non-race week with 18.5 hours of running and two rowing sessions.  I felt primed to go big and everything worked out as I had a few days off (had to use or loose some vacation), no travel plans, good weather, and good legs.  I felt stronger at the end of the week than I did at the beginning.

Dropped the kids off at school and ran a couple of loops in the Highlands Ranch backcountry.  Cold and miserable day, but the forecast was looking much better later in the week so I got though it.

Had about 90 seconds of sunshine just after dawn, then it went dark for the rest of the day.

Face too frozen to smile.

Rowed early, then got out for a nice long one to Chatfield and back.  I was happy with my consistent pace after a creaky first mile.

Feeling it now.  Calves are thrashed.  Ran up Sharptail into a 1,000mph headwind.  Had some goober on the lens, but caught this crow bothering a raptor.

Up and out early before dawn to jog an easy 4 and loosen up a little.  Then out with the dog for 1.5.  After that, we headed to Castle Rock to run in our 7th consecutive Turkey Trot together as a family.  I looped back after I finished and walked the last half with my girls.  My legs felt ok to run hard, they just wouldn’t go as fast as I wanted.  Averaged 6:58.

Back to work.  Steady lunch run.

Met up with Woody, Joe, Jim, and Pat for a long one in the Roxborough area.  I jogged over to Sharptail from my house and then ran with the guys up and over Carpenter Peak.  I dropped down into Waterton while they continued up to Indian Creek.  Fantastic morning for a run and it was great to get out with the guys for a bit.  I suffered up the Carpenter climb like I knew I would, but I was super happy with how good I felt otherwise.  Wish I had the time to go longer, but had to be home by 11:00 to do lunch and then shoot our family pics.

My daughter teases that I ran out of leg paint.

Nice buck in the canyon.

Decided to take some family pics while our mountain-child was in town with us. Shot this with an 85mm so the camera was a fair distance away. Hitting the timer and then sprinting into position was no easy task for my worked legs.

Out with the dog, then drove Malcolm back up to Leadville.  Felt like I could have done another 20.

Nice sunset over Halo Ridge and Mount of the Holy Cross.  Malcolm and I hiked that route back in July.  I think most people would like the second shot more than the first, but I really like the light on the ridge in that first one.  They were taken 12 minutes apart.