I’ve known about the Colorado Trail Race for a few years, and have been wanting to go check out the start since it begins just a mile and a half from my house.  I finally made that happen by getting up at 05:00 Monday morning and heading down to the Waterton Canyon trailhead, which is the beginning of the 470 mile Colorado Trail.

The parking lot was just starting to show some signs of life as the sky got lighter in advance of the 6:00 AM start.

The CTR is a totally self-supported event.  No crews or caching allowed.  Stocking up at gas stations and grocery stores whenever the route passes civilization seems to be the way to go.  Riding from convenience store to convenience store – now that’s my kind of race!

The rules are simple:

The bike geek in me really wanted to hang out at the start and see how the 70+ racers had packed and loaded their equipment for this adventure, but the photographer in me won out and I rolled silently out of the lot a half hour before the start to set up for a shot.

I rode about a mile and a half before ditching my bike and climbing several hundred feet up a ridge where I have been doing some hill repeats.  It is a nasty, steep, loose, overgrown ‘trail’.

I knew it had a nice view of the canyon road below, and it the riders would be nicely packed together so close to the start.  I hung out and took some test shots to get the exposure settings dialed in.

The sunrise wasn’t too shabby.

Before too long the racers appeared, and my legs were wishing I was pedaling with them.

I was a little high up and far away to have the racers turn out like anything more than tiny specs on the road with my wide angle lens, but I wanted to convey a sense of their smallness in the massive landscape they were moving through, and symbolize the magnitude of the journey they were just beginning.

One cool feature of this race, is that everyone carries a Spot GPS device.  There is a tracking map where you can see the position of everyone in the race in near real-time.  This is how the map looked after I got in to work: 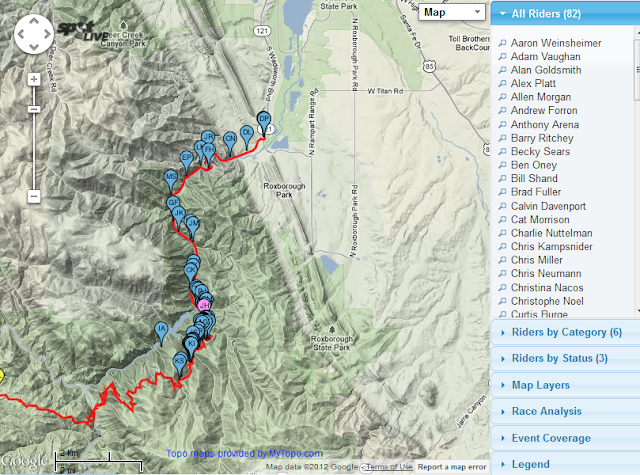 As of tonight (Wednesday evening) the leaders are already past the imaginary line you can draw North-South between Pagosa Springs and Gunnison.  Ethan Passant has ridden 360 miles and has just over a hundred to go and looks to have a shot at breaking the current 4 day – 3 hour record. 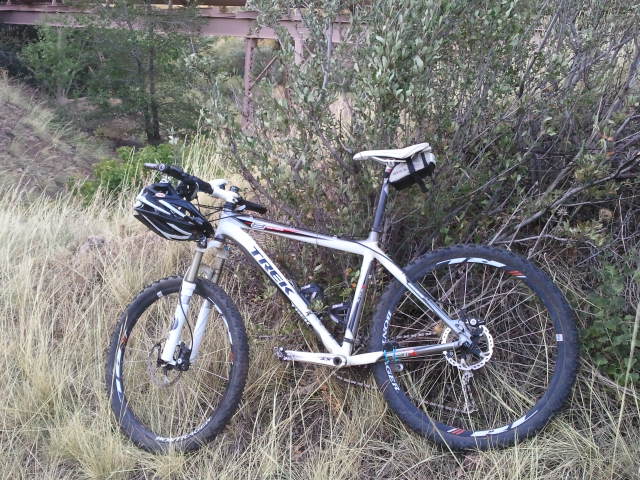 Posted on August 1, 2012, in Uncategorized. Bookmark the permalink. 1 Comment.