A business trip to the Chicago area provided me with the platform to do this race.  I skipped the trip downtown with the rest of the crew to attend a baseball game and drove 90 minutes west after putting in a solid day of Friday work.  I was looking forward to this race because it was a trail race at night.  I love running trails at night, and getting the chance to do a faster effort vs. walking/stumbling the night away in a 100 miler sounded like a lot of fun.

I made it to Rock Cut State Park with plenty of time to get in a nice slow 4 mile warmup with a few strides thrown in to loosen up the legs after all of the plane and car time, plus the 20 miler I had run the day before, and sitting in the cold AC of a data center all day.  I was pleased that my legs felt good and ready to roll.  I ran a bit on a paved path and came across an intersection with some flagging leading down some dirt.  I followed it thinking I had found the course and was expecting it to be a very fast race because the trail seemed quite tame. 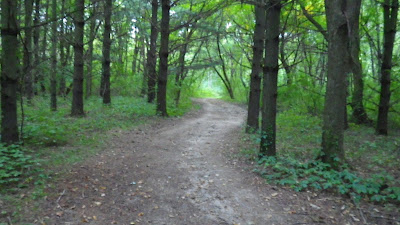 I would later learn, as I was huffing my way in the dark up and down steep, root-filled singletrack ascents and descents, that I had been warming up on the 25k/50k course that was going to be used over the weekend.  So much for the preview!

The course ran around a lake in the southern half of the park.  I would say it was equal parts fast cruising and challenging trail.

I saw and heard more than a few stumbles and wipeouts, and was glad that I had made the call to grab my super bright Fenix flashlight as well as my headlamp.  It really sucked not being able to swing my arm that was carrying the flashlight while trying to run fast, but the tradeoff in being able to light up all of the obstacles made it totally worth it.  I would have been in trouble trying to get by with my dinky headlamp. 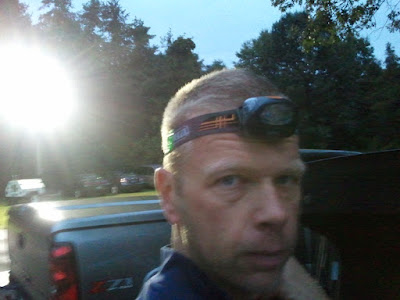 They had generator-lights set up at the start/finish area and there was a cool vibe among the crowd.  I knew we were in for an exciting race.  A few minutes before go time, the crowd started walking with a purpose down the park road.  I had no idea what was going on, but followed along and found out that the start was actually down the road a bit.  I love the unique-ness of race starts.  From jets flying overhead at Boston, to the pitch black sky at Leadville, I’ve seen many of them – and this one was really cool.  I managed to score a spot at the far left of the front row.  It was completely dark now and there were 130 runners with lights on hooting and howling.  We all sang the national anthem together which was a nice touch, and then nervously eyeballed the 30 feet of grass separating us from the wall of trees ahead.  There was a 10 foot opening that we were aiming for, and I was grinning at the thought of the sprint that was sure to come.  There was a guy on a bike that would be leading the way with his bright lights, and after giving him a few second’s head start, we were off with a bang.  I sprinted for all I was worth and made it through the opening in 4th place.  Whew!  The first mile+ was on a gradually descending wide path and the speed was high as we sorted ourselves out.  Being content to get through the initial hole-shot charge in one piece, I eased back just a bit and gradually drifted back into 10th place before kicking it into gear and settling in for the next part of the race.

Once the singletrack and hills started in the second mile, I lost contact with the front group.  I just couldn’t quite hang with them and found myself leading the second pack before dropping all of them to run the rest of the race in no-man’s-land.  It ended up being a time trial for me as I ended up 1.5 minutes behind the lead group by the finish, but 2 minutes ahead of the next runner behind me.

The sparse glow sticks made for some tough navigation at times, and I was really wishing I had the legs to stay with that group.  As it was, I only made one small error that was quickly corrected.  At one point a couple of guys popped out onto the trail right in front of me and I informed them that they had cut the course, which I knew was super easy to do in that spot because I almost got caught by the same fork in the trail they had taken.

I hadn’t spent much time looking at my watch, which is pretty tough to do running at speed in the dark, but as I cruised up a longer but easier hill I decided I would take a look as I crested the top.  I spent just a beat or two longer than normal staring at the display to figure out my current time and how much farther I had left to go.  I looked up just in time to see a 18″ tree trunk spanning the trail at just over knee height.  I was planted with my left foot and thankfully my right was still on an upward trajectory and I was able to guide it up onto the tree and spring over it.  That was close!  Glad I didn’t end up with busted kneecaps.  The tree was well marked with flagging and glow sticks, I had just taken my eyes off the trail for too long.

The rest of the race was uneventful except for a whole lot of suffering.  There were a couple of short but unexpected and soul-crushing climbs in the last mile that really took it out of me.  Finally I broke into a clearing and was able to sprint across the grass to the finish line.

The only pass I made during the race was going by a kid that had taken a tumble and was walking it off.  That moved me up to 9th place, and I took first in my age group.  Despite the lack of company near by during the race, I still had a blast.  Racing through the forest like that at night is a riot.  Can’t wait to do it again.

The race was well run and had tons of pizza and ice cream afterwards.  It was nice to hang out for a bit before I had to make the drive back to the world of work that was waiting for me. 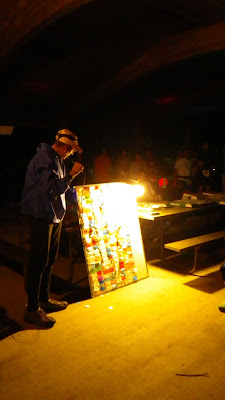 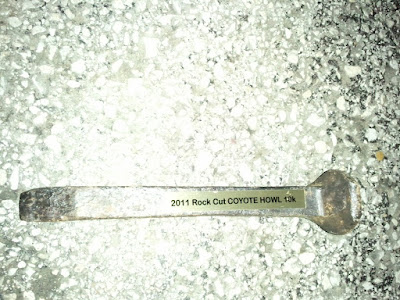