We went to the end-of-season banquet for the high school cross country team this week.  One of the parents had a connection and was able to get Jenny Barringer to come and speak to the group.  She is a professional runner sponsored by New Balance.

She didn’t speak for a long time, but her remarks were very good. Despite being an olympian and national record holder, she opted to tell funny stories about her high school cross country experience. 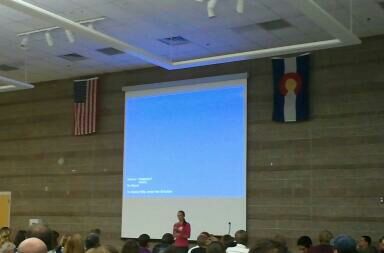 While I would have loved to hear stories of the olympics and of setting records on the track, the light-hearted nature of her talk really hit the mark with my teenage daughters. They came away with a sense of how much fun participating in cross country can be. It was cool for them to hear that coming from someone with so many accomplishments at such a high level, and partly due to hearing that speech they are now planning on running next year – where it was out of the question until now. Cool!

After the talk, Jenny took time to sign posters for everyone on the team. No small task as there were around 60 kids in attendance.

After that, the XC coach spoke and introduced each kid while saying some nice words about each of them. You would think that with so many kids the intros would get repetitive, but I was really impressed by how well he knew each kid from the slowest to the fastest and could relate to them on a personal level.

Here is Malcolm getting his certificate. Coach said he really got a kick out of seeing his progress through each race of the season and recognized his effort and consistency.

I think my girls were encouraged at the sight of all the girls on the team and seeing the obvious bond they had. A video recap of the seasin was shown and you could tell that the kids really had a great time. It also helped that both the girl’s and the boy’s teams had their best season in school history!

Posted on November 15, 2010, in run. Bookmark the permalink. Leave a comment.